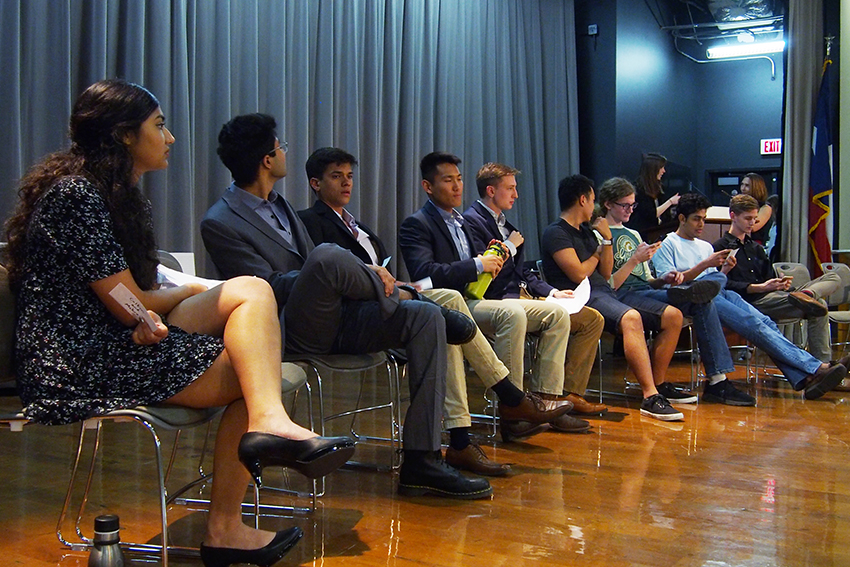 Executive alliance and University-wide representative candidates presented their campaigns to a crowd of about 50 students in an annual debate hosted by The Daily Texan on Monday evening.

Ibrahim and McMorris’ campaign emphasized the need for inclusion of students living in Riverside, including creating a student center in the area.

“It’s not fair that so much of our student body is unable to have the same experience,” Ibrahim said. “So I think starting to shift this culture where we’re equalizing the playing field starts with Riverside, starts with low-income communities, starts with students of color that are forced to live there.”

Fuller and Sundaram said the most important part of their platform is to foster conversation on campus.

“Vikram and I are running because we’re concerned about the state of civil discourse on this campus,” Fuller said. “It’s about making decisions through civil discourse and intellectual humility rather than groupthink and identity politics.”

Richardson and Liu said they are committed to bringing about small changes on campus, such as free printing for students and affordability of on-campus dining for students living off-campus.

Goss and Lee said, if elected, they would dedicate their executive alliance stipends to other causes such as reducing transcript prices and improving SURE Walk.

“Our campaign is about doing something right out of the gate that people can see and touch, and that’s putting these $60,000 aside that the executive branch gets and (doesn’t use) and putting it back into the student body so that they can afford transcripts that are basically unaffordable at this point,” Goss said.

Saraiya and Noble Hernandez advocated for changes such as renaming the Robert Lee Moore building, building pubs on campus and rewarding students for healthy habits.

“If we can have a system where for every hour you spend at the gym, you get an entry for a lottery for some sum of Bevo Bucks, I think that would probably make us the healthiest, fittest university,” Noble Hernandez said.

On addressing sexual assault on campus, the Becker-Rahman campaign said they want to enact a mandatory consent training in First-Year Interest Groups.

“One of the most effective ways to bring about change and how people approach these conversations about consent and things like that is repeated exposure,” Becker said. “As of now at orientation, there’s just one video learning tool that’s used that doesn’t offer students the ability to really engage with this conversation and explore the nuances.”