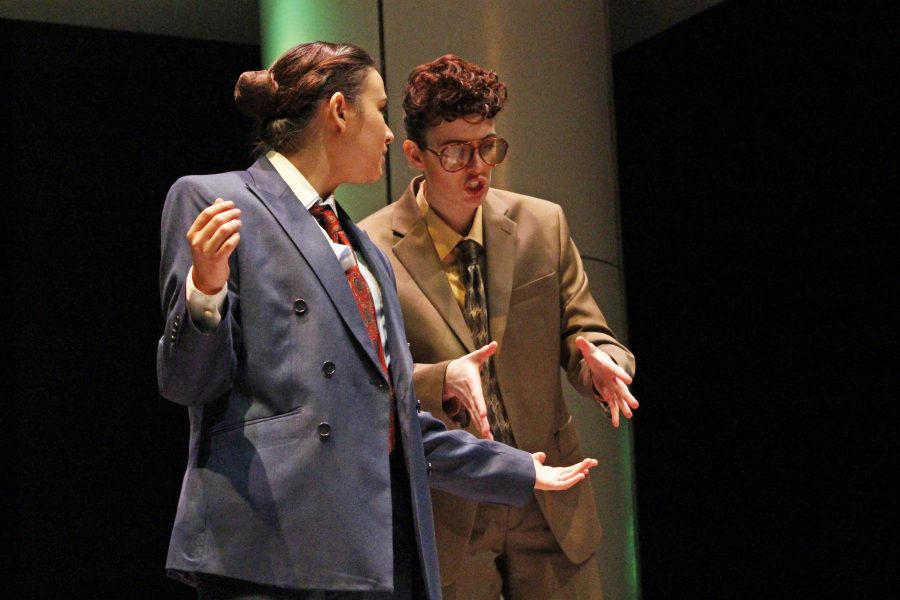 “Enron” tells a familiar story of one of the biggest financial scandals in history, but UT Theatre and Dance brings a unique twist to the tale with an inventive cast of all women and non-binary actors and
imaginative display.

Hannah Wolf, the play’s director and MFA graduate student, said her decision to cast non-binary actors was her intention since the project’s inception. By exercising male roles through non-male actors, Wolf’s aspiration is to allow an opportunity to question the status quo of male behavior.

“There is a lot of talk in our society looking into toxic masculinity and power,” Wolf said. “I’m thinking specifically at what are the traits that sit on a human’s body and what they are trained to do throughout their entire life subconsciously.”

Wolf said her vision is to explore these traits on bodies our society doesn’t naturally see in powerful roles. When audiences see actors who aren’t men display traits normally attributed to men, the absurdity of common male behavior is more obvious. When acting senior Annemarie Alaniz took on the role of former Enron CEO Jeffrey Skilling, she saw it as an opportunity to assume an identity that she normally wouldn’t be able to fulfill in real life.

“I know that there would probably be no other opportunity to play a character this way,” Alaniz said. “Getting to take on those qualities became more than about portraying a male. It’s about portraying someone who was born with this assumed power that he automatically thinks he has.”

Expanding beyond a gender power dynamic, Wolf’s interests also led her to explore how she can question typical
male behavior.

“The goal is for (the cast) to portray tactics that are often prescribed to the male gender,” Wolf said. “Because (I’m) a person who naturally does not do these gestures, I get to question what’s going on here. It’s subverting what we think the
status quo is.”

Beagles added that spectacle is a major aspect of the show the audience can really look
forward to.

“It’s the first show that I’ve seen being made at UT that emphasizes spectacle more than anything else. Every single scene has an element of ‘What the heck, why is this happening, this is so cool.’”

Wolf’s wish is to fully realize the intent of the original production’s use of spectacle in order to liven up its emotionless financial part.

“We are really leaning into how to show more than just tell,” Wolf said. “There are a lot of very performative and theatrical moments. Because structured finance is not inherently theatrical, the original production physicalized all the metaphors they (the characters)
were using.”

The goal for “Enron,” in its amplified production elements, is to make the audience feel the same power as the characters in order fully feel the weight of how their big plans fail in the end.

“The spectacle is built to bring the audience into the opulence of being inside a bubble,” Wolf said. “Then you watch everything start to disintegrate as they start to lose, and once that bubble pops everything falls apart.”