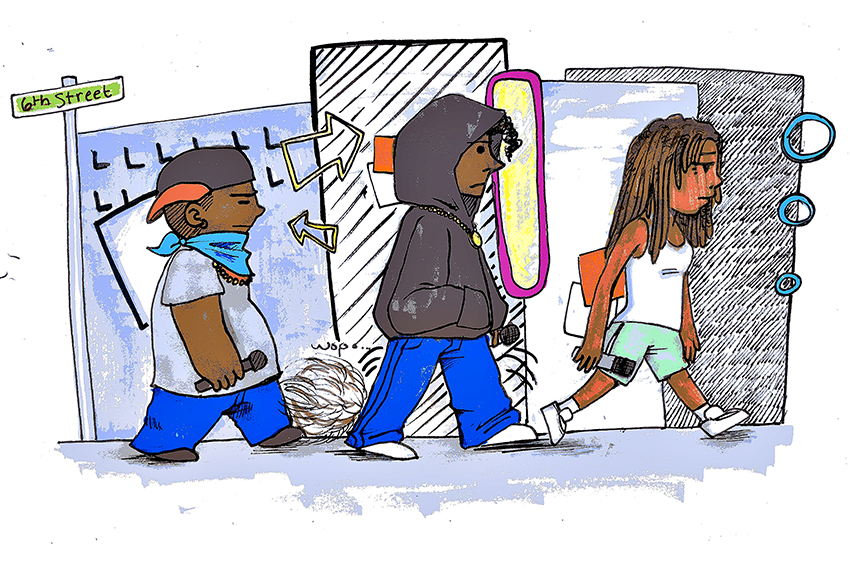 When you think of Austin hip-hop, Magna Carda is the group that comes to mind. Formed in 2012, the group already has several EPs and mixtapes under its belt, the latest being Coffee Table Talk Vol. 1.

Magna Carda stands out by incorporating modern hip-hop sounds with a live band. The group’s production is on the cutting edge of this kind of indie-trap sound that emerged in 2017, and considering no one else is performing that kind of sound on live instrumentation, Magna Carda stands out in the scene.

Some of Magna Carda’s standout tracks are “The Root,” “Joccin’” and “Apple Green,” each of which show off the group’s versatility and instrumental technique.

Riders Against the Storm

Hip-hop duo Riders Against the Storm is as iconic in Austin hip-hop as the “I love you so much” graffiti is on tourists’ Instagram feeds. As husband and wife, this hip-hop duo’s sound is centered around a mix of electronic synth sounds and traditional sounds, sometimes pulling from the folk sounds of their Haitian origins. They are known for wearing colorful and pomp clothing on stage combined with colorful makeup influenced from their Haitian roots. Riders holds the distinction of winning Band of the Year at the 2014 and 2015 Austin Music Awards, the most recognition given to any Austin hip-hop troupe.

Riders Against the Storm’s output ranges from socially aware lyricism to catchy and danceable club beats, as exemplified in the tracks “Mali,” “Everybody Wannabe” and “Booty Sweat.”

The Teeta is the most modern-sounding artist or group of this list, working in a trap-influenced style. His latest album,
Killstreak II, released in 2017, is an interesting combination of both trap and house music influences, taking a bit of a step away from the jazzier production seen in the Monsta in Tha Attic III EP. The Teeta raps with a monotone voice, typically over electric and aggressive beats. He often samples from pop culture, such as in his song “Run It Up,” where he samples a lot of sound bites popular in meme hype videos.

In “Mood Swings,” “Damn” and “Sayonara,” the Teeta showcases his unique vocal style over a few different production styles he’s developed over the course of his career.

The Dirt Skulls are the most Austin of Austin hip-hop groups in the sense that they’re “weird.” Their EP These Monkeys are Too Human is an intriguing nostalgic blend of ’90s-influenced rap with a multitude of influences in their
production. The group’s tracks incorporate everything from guitar solos and Lonnie Liston Smith-inspired piano to bar room-style crooning and noisy, ambient samples. Considering modern hip-hop trends, Dirt Skulls’ music might not be everybody’s cup of tea, but it’s still worth listening for the innovative production alone.

Showing off all the crazy and different sounds one could put into an EP, Dirt Skulls’ “Memories,” “Bang Your Head (ft. Nate Breezy)” and “Dumb Shit (ft. PKB)” stick out for all the right reasons.

Kydd Jones is a rapper, producer and MC who rose to prominence in 2014, going on to perform at the Billboard Hot 100 fest in 2015. A rare case of an Austin hip-hop artist to break beyond Austin or even Texas, Kydd Jones has performed alongside the likes of Yung Lean and Danny Brown.

Kydd primarily raps about growing up in South Austin, and his production is high-quality and uses horn instrumentations, interesting synth lines and bass-heavy rhythms. His sound is definitely unique within the Texas scene, with obvious J. Dilla influences in his music.