Balancing UT’s budget and rising tuition: Where does the University’s money come from and where does it go?

UT President Gregory Fenves proposed 2 percent tuition increases for the 2018-19 and 2019-20 academic years last December. Now, the future of every UT student's tuition will be up to the UT System Board of Regents.

The UT System has not yet set a date for a decision, but tuition increases for the next two academic years can only occur with the Board's approval.

If the proposal is approved by the Board, undergraduate in-state tuition, which totals about $5,200 per semester, will rise by $104 in the fall of 2018, and by another $106 in the fall of 2019. Out-of-state undergraduates and graduate students would see similar increases. Students under the Longhorn Fixed Tuition will not be affected. Before submitting an official proposal in December, the University asked students for feedback. But students still took to social media concerned and confused about the rising tuition.

If the UT System holds the second-largest university endowment in the U.S., why is more money needed from students?

The answers to these questions are complicated and often debated. To better understand the discussion, here’s a run-down of UT’s budget and how tuition is helping UT pay the bills this 2017-2018 fiscal year. 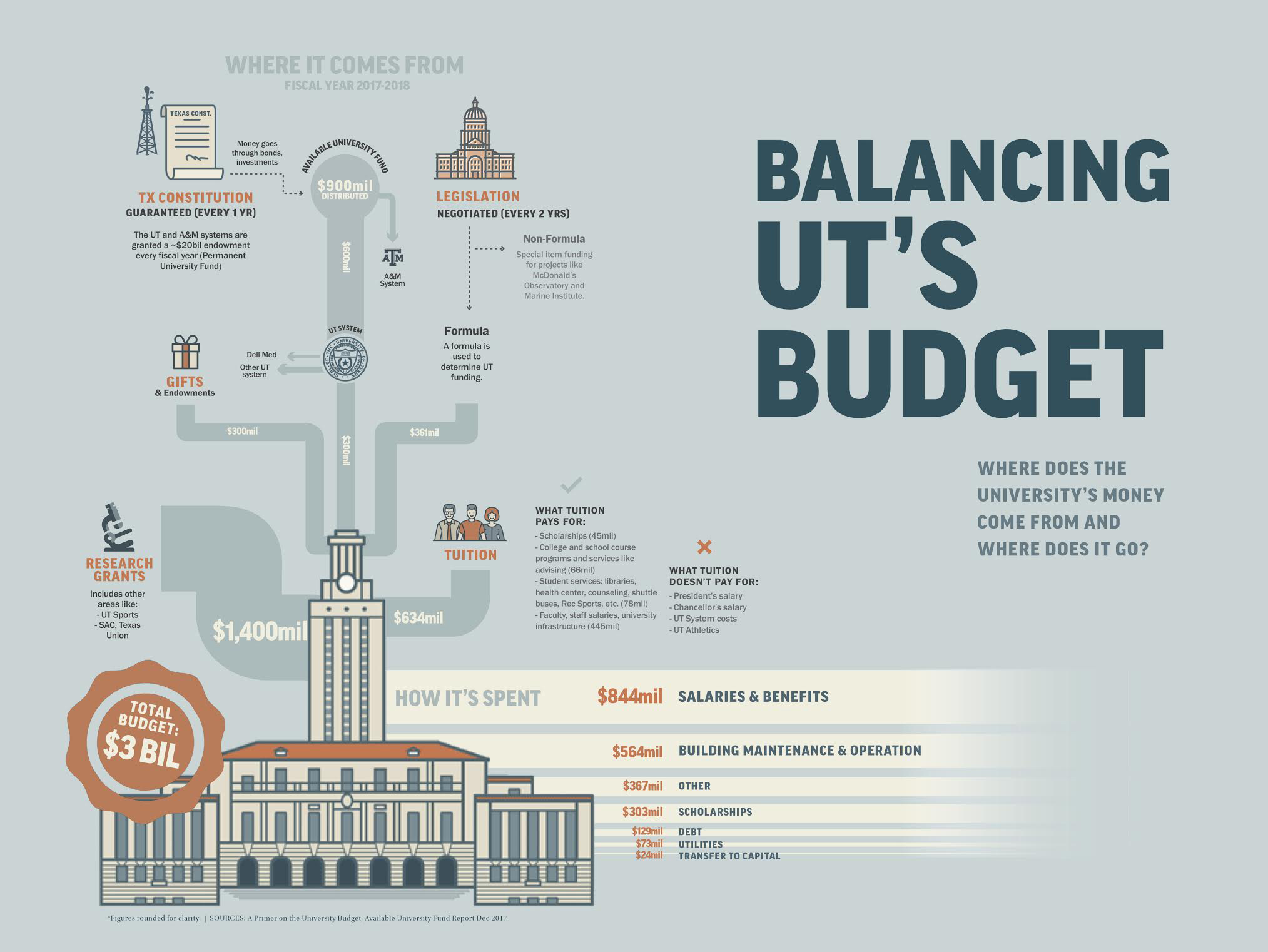 Some of UT’s most notable funding sources are from the state, which funds UT through state appropriations and an endowment.

In 1876, the Texas constitution established the Permanent University Fund for the UT and Texas A&M Systems. The fund generates revenue by leasing 2.1 million acres of West Texas land under the entity University Lands. The land is used by companies for agriculture, oil and energy operations.

The income from the fund, which currently holds $21 billion, is then invested and managed by UT’s Investment Management Company, a nonprofit corporation under the UT System. Each year, the UT System Board of Regents dispenses 4 to 7 percent of the return of investments, called the Available University Fund, AUF, to the UT and A&M systems.

The constitution mandates A&M institutions receive one-third and the UT System receive the remaining two-thirds. As a flagship university, UT-Austin must receive direct funding from the AUF, but the regents set the amount only after AUF funds are used to pay for the UT System’s debt. For 2017, the Board allocated almost half, approximately $297.6 million, of the roughly $600 million AUF to UT.

The Board can provide UT with additional AUF funding for special initiatives such as the Dell Medical School, but does not direct UT-Austin on how to use AUF funds or how much to allocate for student financial aid, UT System spokesperson Karen Adler said.

The state appropriations act states AUF allocations, which make up about 11 percent of the University’s 2017-18 fiscal year budget, can be used for expenses such as new construction, salaries, scholarships, fellowships and library support. With input from University leaders, Fenves ultimately sets the budget.

Formula funding calculates appropriations for universities through a formula that factors how many students an institution has and students’ fields of study.

The Legislature can also allocate universities with funds for special projects through non-formula funding, commonly known as special-item funding. For the 2017-2018 year, UT received about $20 million for 14 special items, including the McDonald Observatory and the Marine Science Institute. This was a 30 percent reduction from previous years.

Meanwhile, lawmakers believe the Legislature’s funding, especially for special-items, is unsustainable. Lawmakers are currently working in a joint committee to develop another funding system based on student outcomes.

Other Sources of Funding

The University actually receives a large portion of its funding, 47 percent, through research grants and “other areas.” Researchers often pay fees for using UT’s property or equipment, such as laboratories.

Other institutions, such as UT athletics, are self-supporting. UT athletics’ revenue paid for the infamous $8,700 football lockers — not tuition.

The gifts and endowments to the University, which often make headlines for helping create new buildings or programs, only make-up 10 percent of the University’s budget and can only fund what donors decide.

Under state law, a portion of students’ tuition must be set aside for need-based financial aid. This helped generate $45 million for scholarships for 2017-18.

Two sides of the coin

Since the 2018 U.S. inflation rate is projected to be at 2.38 percent, the proposed 2 percent increase is not extreme in higher education, said Richard Vedder, director of Ohio University’s Center for College Affordability and Productivity.

Initiatives from UT System administration, such as a failed $75 million online learning institute and $200 million land purchase for a Houston campus that never got built, have led lawmakers and regents to look more closely at the UT System’s use of state endowment funds.

For 2017-18, UT spent $303 million, or 10 percent of its budget, on scholarships, but critics of the UT System think there’s room for more student financial aid.

“UT is one of the most well endowed universities,” Vedder said. “But if you look at the use of the funds, very little of that money is used for financial aid.”

With a similar concern in mind, UT System Regent Kevin Eltife is leading a task force along with Regents Janiece Longoria, Rad Weaver and Ernest Aliseda, who will study the UT System’s administrative spending and recommend changes by August.

Correction: A previous version of this story stated the UT System Board of Regents would be voting on tuition Monday or Tuesday, Feb. 27, 28. The Board of Regents will not vote or discuss tuition on those days. This story has been changed to reflect this. The Texan regrets this error.