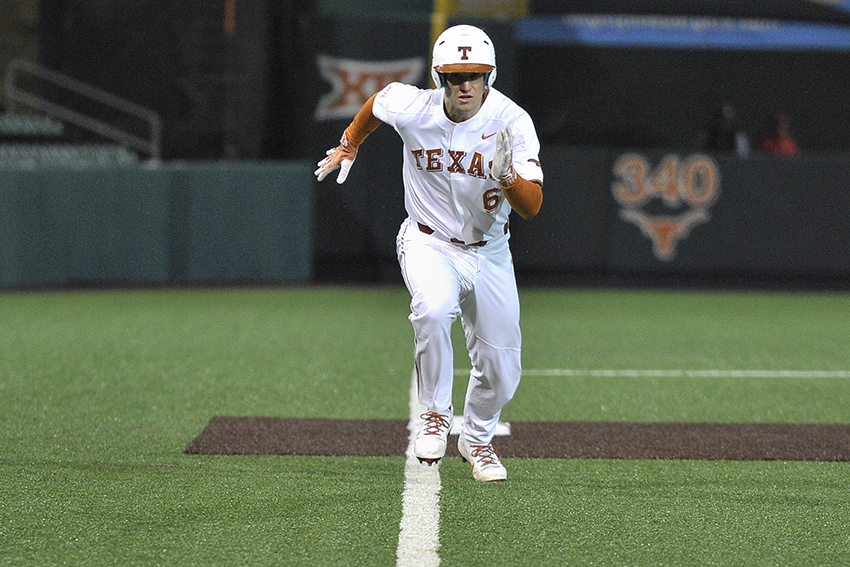 A single, a walk and a hit-by-pitch — to most batters, the sequence is a satisfactory end-of-game stat line.

For freshman pitcher Nico O’Donnell, making his first start for the Longhorns on Wednesday night, the sequence represented the nightmarish results from his first three collegiate batters faced.

But O’Donnell settled in, the Texas bats came alive and Lamar fumbled the ball around in the field as the Longhorns surged to a 7-2 victory over the Cardinals on a frosty night at UFCU Disch-Falk Field.

“I thought Nico was a little shaky early, but that’s understandable given the conditions tonight,” Texas head coach David Pierce said. “But I’m really proud of him because we overcame it. Overall, a solid victory against a pretty good ball club.”

Despite the rough start, Texas (3–1) was able to escape a first inning in which Lamar loaded the bases twice, allowing only one run.

The Longhorns rallied to tie the game in the bottom of the second. Junior catcher DJ Petrinsky opened the inning with a single up the middle, his first hit of the young season. After a sacrifice bunt moved Petrinsky to second, the catcher was brought home on a hard-hit line drive down the right field line by junior outfielder Tate Shaw.

In the fourth, the Longhorns capitalized on Lamar’s mistakes to take control of the game. Petrinsky again got things started with a single and advanced to second on a throwing error. After a wild pitch advanced Petrinsky to third, freshman infielder Zach Zubia hit a sacrifice fly to score the Longhorns’ second run of the game.

But the errors for Lamar didn’t stop there. Shaw reached on a single to continue the inning, and junior catcher Michael McCann was able to advance Shaw to third thanks to a fielding error by the Cardinals. Two batters later, Lamar badly handled a grounder by sophomore infielder David Hamilton, and Shaw crossed home plate to give Texas a 3-1 lead.

“We’ve got to capitalize, especially when teams make a lot of errors,” Petrinsky said. “(Wednesday) games are important, and it felt good to capitalize and get a win.”

In their most explosive frame of the season, Texas tacked on four runs in the fifth to blow the game wide open. After a Todd walk, Petrinsky notched another hit — a booming double to left center — to bring home the runner. Zubia proceeded to drive in Petrinsky with an off-the-wall triple that was inches from leaving the park. The Longhorns scored another two runs in the inning to extend their lead to a 7-1 advantage.

Texas finished with a season-high 10 hits. Petrinsky was the clear catalyst for Texas, breaking out of a mini-slump to go 3-for-4 with an RBI and a walk.

“Guys are doing a great job of getting better pitches to hit,” Pierce said. “With a little more selection, when we get pitches we’re able to handle it. We’re doing a much better job with two strikes.”

Even with the tough start, O’Donnell managed 3.1 innings, only allowing a run with two strikeouts. Freshman Bryce Elder was awarded the win, going 1.2 innings with a strikeout.

The Longhorns now turn their attention toward a three-game road series with LSU this weekend.