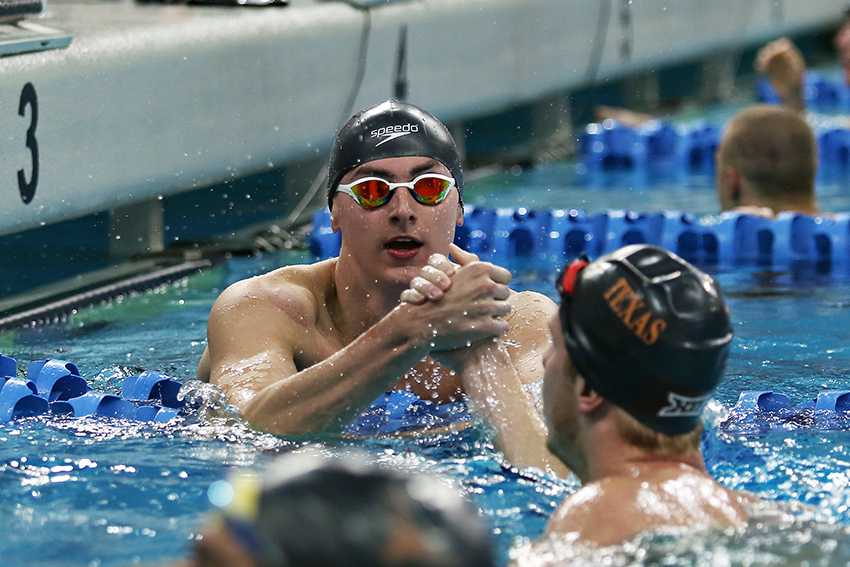 Joining a 13-time NCAA championship team is no small feat. But it does hold big expectations.

Not to mention it presents the tall task of swimming alongside Olympians like senior Joseph Schooling and junior Townley Haas.

For freshman Parker Neri, day two of the Big 12 Championships was an opportunity to showcase that he belonged on this championship-caliber Texas team.

“It is a whole different world,” Neri said. “I thought I trained hard going into this in the summer, but I got my rear-end kicked. It was just something that I was not used to, and I knew that it was either acclimate to it or I wouldn't get any better. You have to keep pushing yourself.”

Neri finished the preliminaries of the 500-yard freestyle Thursday morning with a time good enough for third place, and more importantly, a shot in the finals.

After going neck-and-neck down the stretch, Neri edged out teammates JohnThomas Larson and Haas with a final time of 4:15.40, just one-fifth of a second better than Larson.

In the biggest meet of the year, Neri gave his best run of the season and captured his first Big 12 individual title. With his win, Neri secured a spot at next month’s NCAA Championships in Minneapolis.

“I was so nervous for this,” Neri said. “My time coming into this was right on the bubble of making it (to the NCAA Championships). I didn't want to be that person that at the last minute finds out that he doesn't get to go. I talked to (Texas head coach) Eddie (Reese) about this, and I needed to take it out like that first one didn't mean anything.”