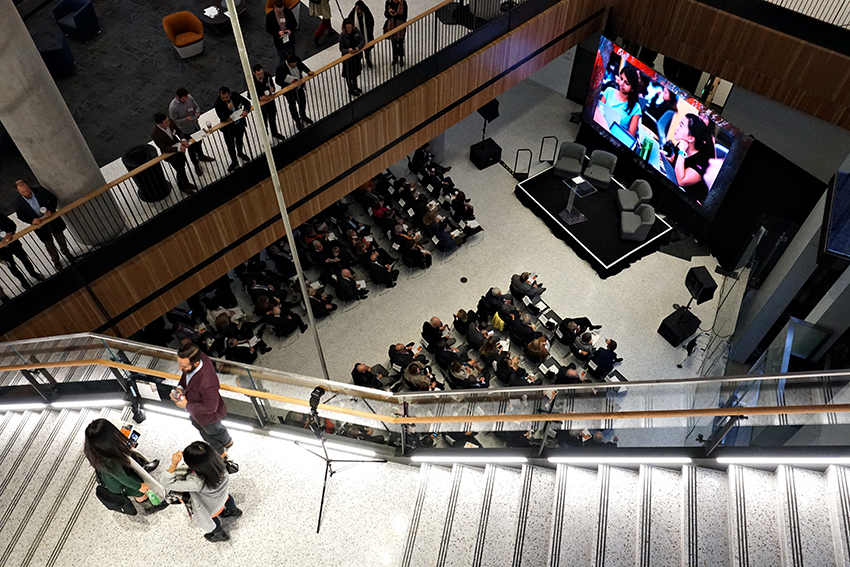 After more than nearly four years of construction, UT celebrated the grand opening of Robert B. Rowling Hall, the new graduate business education center in the McCombs School of Business.

“Well finally, we have Rowling Hall after five years,” said UT President Gregory Fenves at the grand opening on Thursday afternoon. “When I started — I started as president two and a half years ago — it was known as ‘Rowling Hole.’”

The new facility is five stories tall, with an additional six stories of underground parking, which provides more than 400 parking spaces. It has 17 classrooms, 23 conference rooms, 21 interview rooms, 80 study and breakout rooms and a 15,000 square-foot ballroom. The building also has a bar and a cafe, which was named “Moontower Cafe” by a business student, who won the restaurant’s naming contest in 2015.

“Because of Robert B. Rowling Hall, the future of the McCombs School of Business is bright,” McCombs Dean Jay Hartzell said. “It gives me great pride today to see this vision come to life … what starts here changes the world.”

Planning for the new building began in 2013, but construction was not started until the fall of 2014.

The $186.5 million project was partly funded by $58.3 million received through 169 donations, including $25 million from Bob Rowling, a McCombs alumnus and former regent. Rowling said he is still getting used to seeing a building named after him.

Located on the main corridor of Guadalupe Street and Martin Luther King Jr. Boulevard, the new 497,500 square-foot building will bring a modernized look to one of the University’s main entrances.

“Building our future means investing in the next generation, and that’s what we are celebrating today with the opening of Robert. B. Rowling Hall,” Gov. Greg Abbott said in a video message.

The building will be staffed by more than 80 individuals and will house six graduate school programs, including the Texas MBA and master’s program in Technology Commercialization.

“It’s a place where we’re going to be innovating and tinkering and engaging and learning,” said Eric Hirst, senior associate dean of the McCombs School. “I can’t wait to unleash the power of Texas McCombs here at Robert B. Rowling Hall.”