‘We have to find a way’: Longhorns host Oklahoma State for must-win game 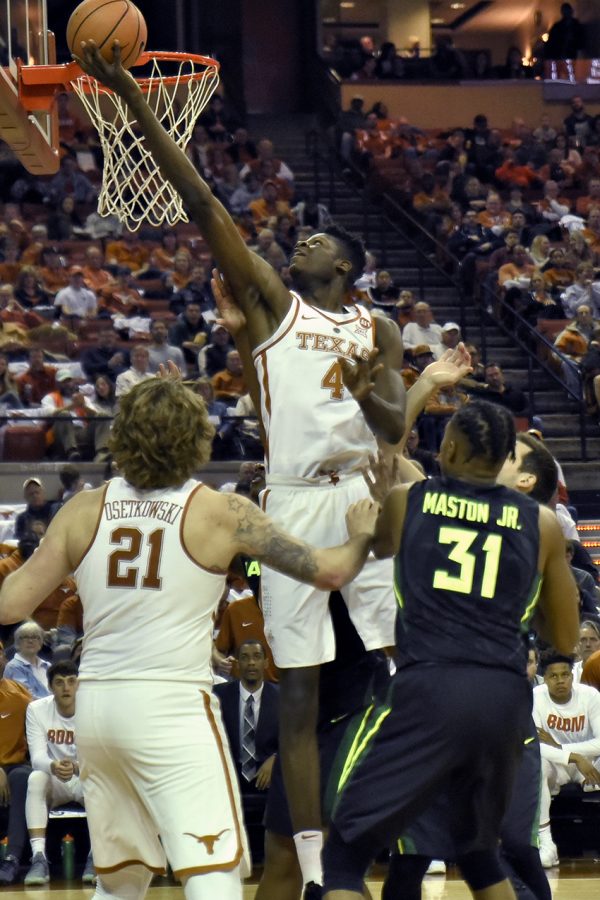 The importance of a win on Saturday for Texas cannot be overstated.

On Wednesday night against Kansas State, Texas head coach Shaka Smart watched from the sideline as his team botched good offensive sets with alarming regularity, failing to find field goals for minutes at a time. The Longhorns made 6-of-32 shots in the second half for a season-low 19 percent field goal percentage in the loss to the Wildcats in Manhattan — a statline that more closely resembles that of a high school game.

The Longhorns have now dropped four of their last five games, with the sole win coming last Saturday against Oklahoma — the only team in the Big 12 unraveling faster than Texas.

Now the Longhorns head back to Austin with the health of freshman forward Mo Bamba (toe injury) in question, and Oklahoma State will come to town for what should be the biggest game of the season.

“That is a game we need to put everything we have into,” Smart said. “(Oklahoma State) was a team that we were beating on the road at their place down the stretch, and they came back. We have to find a way.”

Bamba was clearly hindered on Wednesday night by the lingering toe injury he sustained in the win over the Sooners. The NBA prospect, who averages a double-double, attempted only four shots and grabbed six rebounds in 31 minutes of action against Kansas State.

“I think you could tell watching the game. He tried his best,” Smart said. “But the thing I love about Mo — especially being an elite player and a guy in the position that he is in — he really wanted to play. He wanted to help his team. He wanted to do everything he could to create wins for his team.”

A limited Bamba could further derail a Texas team that has leaned on its defense to win games all season. The same defense that held Oklahoma — the top offensive team in the country — to a season-low 66 points last Saturday struggled to get stops against Kansas State in the second half.

And while the Longhorns were stalling on the road, their Saturday opponent was earning arguably its biggest win of the season. Oklahoma State caught fire from deep and torched No. 6 Texas Tech in an 80-point victory on Wednesday night in Stillwater. A loss on Saturday for either program would likely be the nail in the coffin for any NCAA Tournament hopes.

After Saturday, the Longhorns have two remaining rematches with two of the Big 12’s best. Contests with top-25 opponents in Kansas and West Virginia to close out the season leave zero room for error as the Longhorns look for answers.

With or without a full strength Bamba, Texas still needs to find a way to win over the surging Cowboys.

“Defensively, (Bamba) was a little bit slower than he normally is,” Smart said. “But he fought and he battled. We can win the game with what he gave us. Even with him being hurt, we as a team need to do better in other areas.”