With her college career winding down, Brooke McCarty remains focused on the now 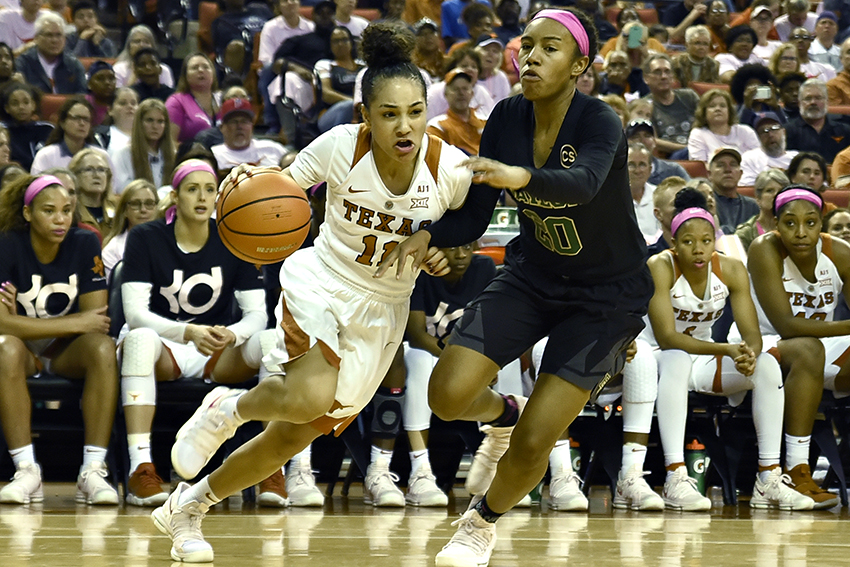 Brooke McCarty is on a mission.

With players such as fellow senior guard Ariel Atkins and junior guard Lashann Higgs always ready to score, McCarty’s role for the No. 6 Longhorns is usually that of the facilitator.

McCarty’s role has expanded as of late, though, as the League City, Texas, native looks to end her career on the 40 Acres with one last run. That run continues on Saturday when Texas takes on Iowa State in Ames, Iowa.

McCarty had the hot hand in the Longhorns’ most recent game against No. 3 Baylor on Monday night. The 5-foot-4 guard did it all, filling the stat sheet with a career-high 32 points and dishing five assists in Texas’ 93-87 loss.

“I was trying to do whatever I could so my team could get points,” McCarty said. “It’s frustrating to lose, but we have to just move on to the next game.”

McCarty’s strong outing was a positive sign for a player who has struggled to consistently find the bottom of the net this season. The 2017 Big 12 Player of the Year is on pace for her lowest field goal percentage — 43 percent — since her freshman season.

But those shooting woes have evaporated over the last two games. McCarty has averaged 24.5 points, shot at a 59-percent clip and has made a scorching 10-of-13 threes during that stretch.

While the hot streak may come as a surprise to most, it’s something Texas head coach Karen Aston knew would come with time.

“I think she’s starting to see the ball go through the net again,” Aston said. “I know that’s a good feeling for a guard that can really shoot. The basket is getting big for her, and (that’s) a good thing for us down the stretch.”

Texas will need another strong performance out of McCarty when the Longhorns face Iowa State on Saturday for the final road game of the regular season.

The Cyclones have their own high-volume scorer in Carleton Bridget, a 6-foot-1 junior guard who’s averaging 18.7 points per game — the fourth-highest total in the Big 12.

The matchup gives McCarty a shot at redemption after the senior guard had one of her worst performances of the season when the two teams met on Jan. 27. McCarty posted just six points on 1-of-6 shooting from the field as the Longhorns snagged an 87-55 victory.

Although Baylor clinched sole possession of the Big 12 regular-season title with the win over Texas on Monday, the Longhorns will still have plenty on the line when they land in Ames.

Getting a favorable seed in the NCAA tournament is crucial, and Texas hopes to use these final two games of the regular season as a chance to boost its resume for a No. 1 seed.

“We still have a lot to play for,” Aston said. “We’re in a position to get a very good seed, and these next two games will be a very big factor, so we’ll be ready.”

For McCarty, this is the final season she’ll don the burnt orange and white. But instead of reminiscing on her decorated career, she remains locked in.

“We just have to stay positive,” McCarty said. “(Younger players) are looking to us seniors, so we have to find out what we can do better each game. We just have to focus.”