Higgs finds her range in 72-59 win over Iowa State 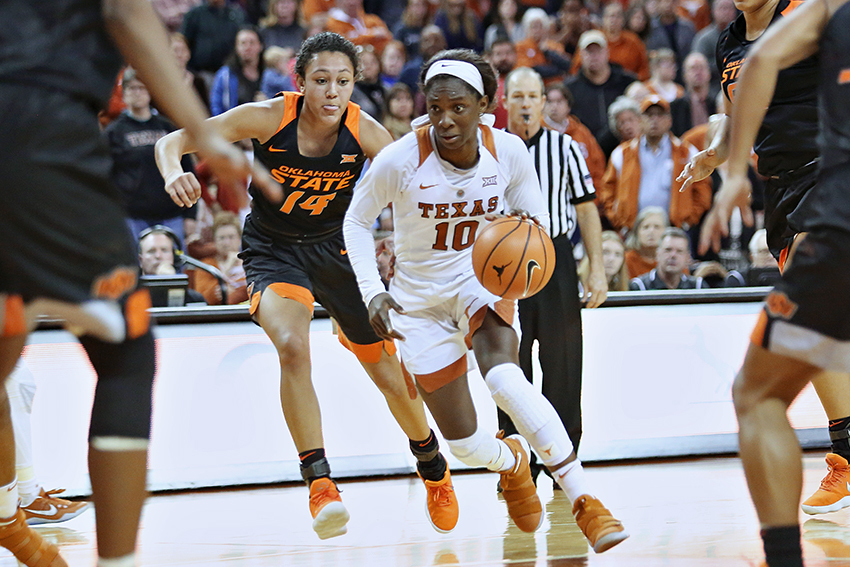 Prior to No. 6 Texas’ 72-59 victory over Iowa State on Saturday, the junior guard had made just one 3-pointer in February. Her 14-point performance in an 87-55 home win over Iowa State on Jan. 27 was the last time she had scored double digits in a game.

Unsure of what was going wrong, she sought help from her coaches.

“Lashann is just one of our players that looks for help or instruction and constructive criticism to get better,” Texas associate head coach Tina Thompson said. “Especially at this time during the year, or because we have time limits, you can’t make them get in the gym. It has to be something that they want to do.”

Higgs was shooting around with Thompson before a practice on Feb. 9 at Denton A. Cooley Pavilion. Thompson wanted Higgs to catch the ball, dip and elevate for her shot in a single, fluid motion.

Higgs was a bit jerky — she kept raising her arms a split second after extending her legs during the jump. The delay threw her shot off.

“Just go down and up,” Thompson said, before passing the ball back to Higgs. “Down and up.”

Higgs has been dealing with ups and downs all season. She shot just 21.7 percent from deep during her sophomore season but has improved to 33.3 percent this year. She’s made three times as many treys.

The downs have been more common this month, though, especially on the offensive end. Before Saturday’s game, Higgs had made just one of her last seven shots from outside.

With two games left in the season, Higgs knew she didn’t have much time to figure things out. She finally turned things around in Ames, Iowa.

Late in the first quarter, junior center Jatarie White caught the ball in the middle of the floor and squared up with the basket. She noticed Higgs’ defender sagging off to help and kicked the ball to Higgs in the left corner. Higgs dipped, elevated and nailed the triple in a single, fluid motion.

She sank another with 6:16 remaining in the fourth quarter. Sophomore guard Alecia Sutton used an in-and-out crossover to get past her man and penetrate into the paint. Higgs’ defender sagged off again, and Sutton found her open on the right wing. Higgs knocked down the three, bringing her point total up to 12 and ending a seven-game single-digit point streak.

“The way (Higgs) scores is kind of, probably, different than any player in the country,” Thompson said. “She’s able to just use her genetic ability to kind of create things or make things happen that are pretty abnormal for most of us.”

Higgs finished Saturday’s game with 14 points, four rebounds, five assists and one steal. Texas (23–5, 14–3 Big 12) will need her to remain consistent on both ends of the floor as the team enters the postseason.

“That’s the only way you can test yourself to see how good of a defender you really are,” Higgs said. “(I enjoy) guarding the best player.”

Senior guards Ariel Atkins and Brooke McCarty combined for 33 points and 15 rebounds against Iowa State, including a career-high 11 rebounds from McCarty. The pair look to close out their final season with a higher sense of urgency.

The Longhorns conclude their regular season against Oklahoma on Tuesday. Tipoff for senior night is set for 6 p.m.