MLK’s Legacy: A discussion on poverty and social justice 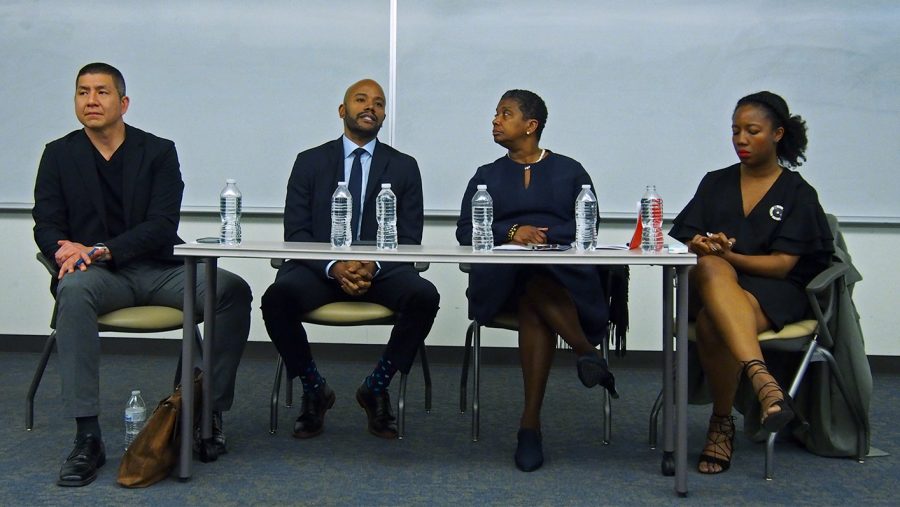 “When Dr. King was killed, I remember my parents were mourning as if they lost a relative,” said Colette Pierce Burnette, president of Huston-Tillotson University. “He had become representative of hope for disenfranchised people. But we have to remember that he was simply human. And it’s this humanity that affects change.”

“Poverty and Social Justice: Then and Now” was moderated by Peniel Joseph, the founding director of the Center for the Study of Race and Democracy at UT.

“We’re here today to talk about Martin Luther King Jr.’s legacy and the reverences and reverberations of his life 50 years later,” Joseph said. “He is one of the quintessential founding architects of post-war American democracy.”

The panelists spoke about how King’s words remain relevant even today.

“One of my favorite sermons that Martin Luther King Jr. ever gave was in Alabama in 1957, in a speech called ‘Conquering Self-Centeredness,’” said Virginia Cumberbatch, director of the Community Engagement Center in the Division of Diversity and Community Engagement at UT. “He talks about how you cannot have progress until you step outside the narrow confines of our individual burdens of humanity.”

The panelists then touched upon how King effectively brought intersectionality to the forefront of his movement.

“In our current context, we as future policymakers or leaders have to be intersectional too,” Cumberbatch said. “A lot of the times, when we become well-versed in a certain sector, we fail to see how those things are interconnected.”

“A lot of movements have been started by women of color,” Garrett said. “Do you feel like there’s a stagnation in that movement because these women don’t get widespread attention until you have a male of color swoop in?”

Burnette said there is still more work to do in this gendered aspect of the movement.

“We just have to keep chiseling away at this movement,” Burnette said. “The more we educate ourselves, the more we can get ourselves to places where we can have a voice, eventually people will become aware of our impact.”