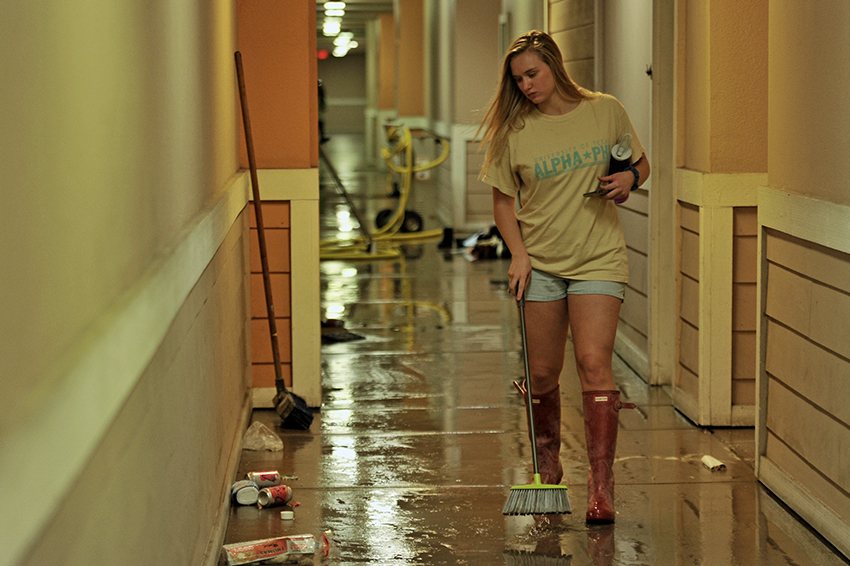 Update (3:29 p.m.): The Office of the Dean of Students said students impacted by the water main break can get help from the Student Emergency Services by calling 512-471-5017.

Assistance from the Dean of Students includes replacing school supplies through the Student Emergency Fund, providing absence notification for students that couldn’t attend class because they were affected by the flooding, providing short-term emergency housing and offering legal services to review leases, said Sara Kennedy, spokeswoman for the Dean of Students.

“The services that are available to the students that may have been impacted by the water main break are available to all of our students,” Kennedy said. “This particular event was just one we were made aware of an event that could be impacting our students and we wanted to make sure they knew what we could do for them and that they were aware of all the services we provide.”

Residents of 26 West dealt with flooding in some apartments last night due to a water main break. They were not evacuated, and not all apartments were affected by the break. | @AnnaLassmann https://t.co/a4lLAhB9Lf pic.twitter.com/cNNAwO2LqM

26 West managment denied requests for comment and said they will release a statement soon.

Maintenance crews are currently working to resolve the issue. The water main break began around 8:30 p.m., Shaina said. Residents were not evacuated, and not all apartments were affected by the break.

Residents of the complex, located at 600 West 26th Street, took to social media after the break,  posting photos and videos of the flooding, many of which show water gushing off of walkways, out of apartment complexes and through the complex’s hallways.

This story will be updated as new information is received.