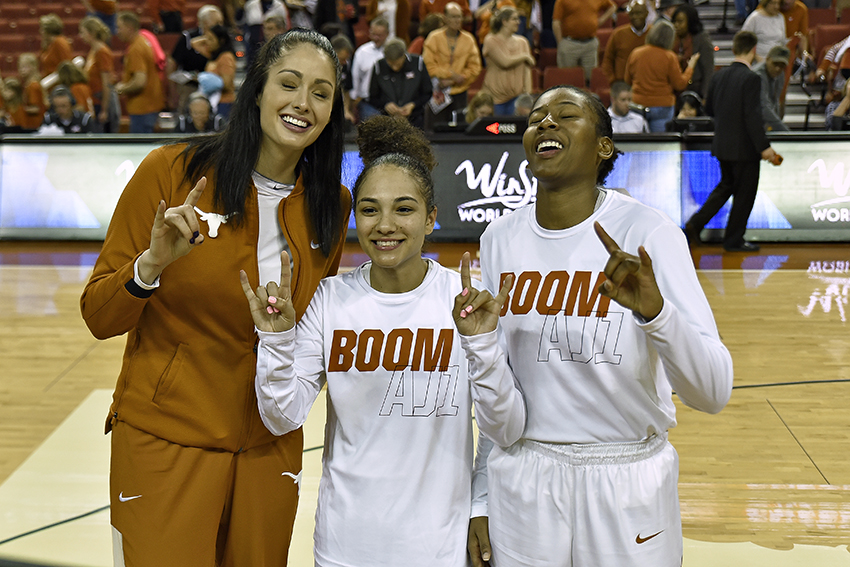 Senior guards Ariel Atkins and Brooke McCarty walked off the court at the Frank Erwin Center on Tuesday night in the most fitting way possible — with a win.

The backcourt duo capped off a four-year run with a bang on senior night, toppling rival Oklahoma in their final regular season home game as Longhorns, 79-66.

“(McCarty and Atkins) were impact players from the second they arrived,” Texas head coach Karen Aston said. “(They came here) to make Texas better … they care about our program. It’ll be different (when they’re gone).”

The night kicked off with a video tribute for the seniors as they walked onto the court with their families by their sides.

Atkins, McCarty and fellow senior Audrey-Ann Caron-Goudreau, who is out indefinitely with a bruised left wrist, then gathered at half court and posed for a photo with Aston. The crowd rose to its feet, giving the trio a round of applause in a touching gesture that brought some players to tears.

Then the game tipped off, and the seniors went into attack mode.

The first quarter belonged to McCarty. After an emphatic chase-down block by junior forward Jordan Hosey with 3:31 left, McCarty drifted to the right corner and called for the ball. She caught the pass and released a long-range bomb without hesitation.

It took two minutes for McCarty to find herself with the ball in the same spot. Once again, she let it fly, and once again, the ball found the bottom of the net.

The Longhorns rallied behind McCarty, pushing past the Sooners to take a 20-13 lead at the end of the first quarter.

But the Sooners were intent on spoiling Texas’ senior night. Oklahoma freshman guard Ana Llanusa led a comeback in the second quarter, drilling two quick threes as the Sooners opened with an 8-2 run.

The two teams exchanged blows, battling to a 30-30 standstill with 2:46 left before halftime.

This time, Atkins had the answer, scoring back-to-back jumpers and sparking an 8-1 Texas run to give the Longhorns a 40-31 lead at halftime.

“I just tried to stay level-headed,” Atkins said. “I tried to withstand the highs and lows of the game and just made sure I did what I needed to do for the team.”

Atkins stayed hot in the second half, contributing on both ends of the court.

The Duncanville, Texas, native totaled five points, three rebounds and two assists to give Texas a 59-48 lead heading in the final quarter.

It was McCarty’s turn in the fourth quarter, as the 5-foot-4-inch guard exploded for nine points, extending the Texas lead to 79-62 with one minute to go.

With the game no longer in question, Aston began making her final substitutions of the night.

First came McCarty, who jogged to the sideline and embraced her head coach as the crowd cheered emphatically. Then came Atkins, who received the same ovation.

“That moment is what we came here for,” McCarty said. “When we came off the court tonight, it showed that not only are our coaches and our teammates our family, but so are the fans that have been here for every single game.”

The final buzzer sounded soon after.

McCarty finished the night with a team-high 17 points in the victory. Atkins tallied 15 points to go along with seven rebounds.

The home win was one of many for a senior duo that took pride in defending their home court over the past four years. The Longhorns are 61–8 at the Erwin Center since 2014 — a testament to the level of excellence set by McCarty and Atkins.

Tuesday’s game might not be the last time McCarty and Atkins play in front of the fans at the Erwin Center, though, as the Longhorns are expected to host the opening rounds of the NCAA Tournament in late March.

Until then, Texas shifts its focus to the Big 12 tournament, which begins Friday in Oklahoma City.