Artists and engineers work together to bring animatronic dinosaurs to life 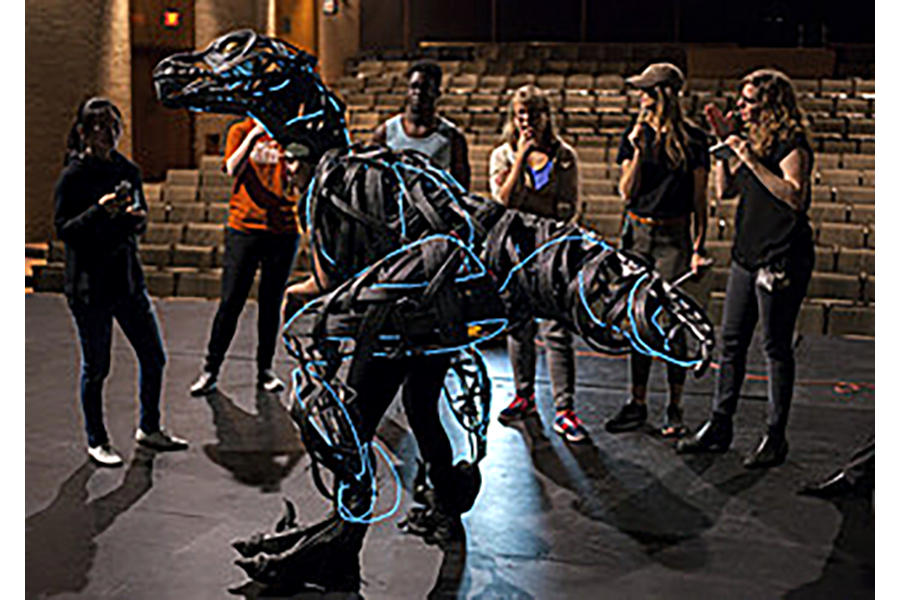 Although art and technology may seem like opposite ends of a spectrum, a class of students brought together the two disciplines to provide animatronic dinosaur suits for a play.

The independent study course, taught by UT theatre and dance lecturers Karen Maness and J.E. Johnson and consisting of 15 students, focused on creating animatronic raptor suits for “Enron.” The play is a twist on a true story of the Enron Corporation’s financial mishaps and uses the dinosaurs to portray greed and capitalism. The class’ goal for the semester was to use technology to create suits that have the illusion of looking like a real velociraptor, or raptor, a type of two-legged carnivorous dinosaur. In order to do this successfully, engineers were needed as much as artists.

“From day one, both (Maness) and (Johnson) made it clear that we should be treating each other as coworkers and as equals,” English alumna Christina Jansen, who worked on the head and the metallic cable skin of the raptor, said. “We all came in and had no idea how to build a raptor. It was new and would be an experiment.”

The students were split into teams to build each part of the three raptor suits. They met every Monday last semester in a room called “The Hatchery” in the Performing Arts Center to develop their masterpieces.

“The class was designed as an interdisciplinary class, so we were interested in integrating technologists (and) people with science-based degrees as well as theatrical designers,” Maness said.

This course was unique because it required so many people from many different backgrounds to create a product; nobody in the class had ever made a raptor before, Maness said.

“To realize a product that has never been seen before, you need to really dig deep into … the engineering of materials technology,” Johnson said.

Throughout the course, all of the students, as well as Johnson and Maness, learned how to build raptor suits using technology such as 3D printers, laser cutters and other technologies not commonly used in art. They also used Wi-Fi and Arduino, a software that allows people to create electronic materials, to create lighting effects.

“The designer wanted the dinosaurs to have a feel of the insides of computers, or machine guts,” Maness said. “So as these raptors become stronger in the story, they become more fleshed out and more like our perception of what a real dinosaur might look like.”

While this class was an experiment, Maness and Johnson said they are developing more classes like this. They have a course coming up this fall focusing on practical special effects which will be offered to a combination of engineers, film students and even architecture students.

Artists have always found ways to incorporate technological advances into their works, Johnson said. When Thomas Edison made the film camera, he didn’t intend for artists to use it the way they did, but it ended up revolutionizing art and entertainment.

“Artists have always been the earliest adopters of new technologies,” he said. “I think that’s why our focus as (the) applied arts is to take the interest around technology in our culture right now, and the interest in entertainment and film, and put those two together so that people from both camps can see the potential in their futures.”