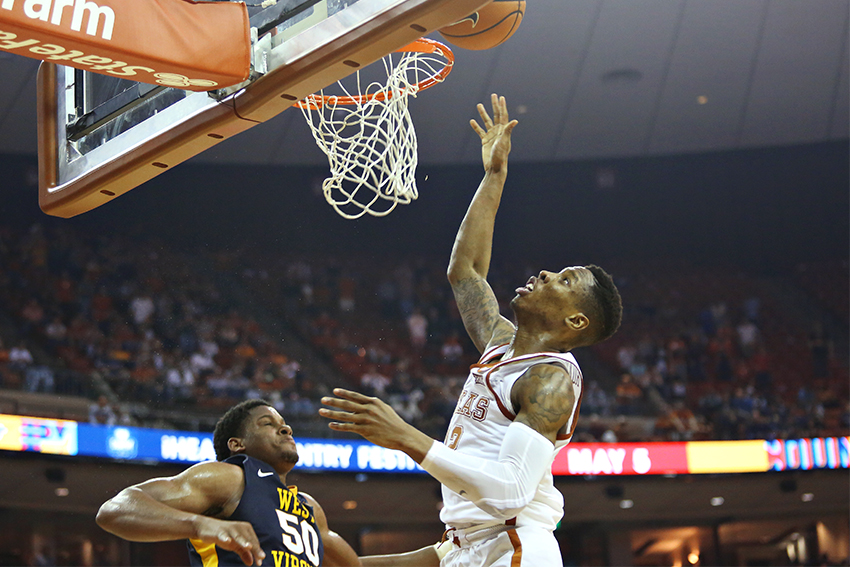 Tournament hopes just got much brighter in the city of Austin. After rallying to an 87-79 overtime win over No. 20 West Virginia, Texas’ odds to qualify for March Madness rose to 98 percent, according to ESPN’s Basketball Power Index (BPI). Here are observations and takeaways from the Longhorns’ potential season-changing victory over the Mountaineers:

Seniors Isaiah Hobbs, Ryan McClurg and Joe Schwartz were honored before the Longhorns’ final scheduled home game of the 2017-18 season. Each of the three was recognized at center-court with white flowers and a framed jersey prior to tipoff. The numbers 22 (Hobbs), 25 (Schwartz) and 30 (McClurg) were draped from the rafters of the Erwin Center as the Longhorns battled the Mountaineers.

Longhorns make up for turnovers with threes

This Texas Longhorns basketball team has many strong suits, and that’s why they’re still in the tournament hunt. Three-point shooting is typically not one of them. The team entered the regular season finale shooting 30.9-percent from beyond the arc, but an early barrage of triples allowed the Longhorns to counter each punch West Virginia threw in the first half. Without center Mo Bamba, Texas moved the ball well around the arc and as a result, earned plenty of open three-point opportunities.

But turnovers were the reason Texas couldn’t pull ahead. West Virginia implemented a press on the Longhorns to force added pressure on their ball handlers and scored its first two baskets off of turnovers. But despite 10 first half giveaways, the Longhorns made up for them by shifting their offense from the interior to the perimeter and sinking five of their first seven threes and 7-of-12 attempts in the first half. Texas finished 11-of-19 from three, the best percentage of the Shaka Smart era.

“We went out there and just played, no worries,” shooting guard Kerwin Roach II said. “You can tell that from Jacob Young. He took a really major three and made it. He just stepped up and made it. He does what we got to do: step up and make shots that we know we can make.”

The rise of Dylan 'Os3tkowski'

Dylan Osetkowski often makes a name for himself on the floor with his hustle, physicality and aggressiveness. But the 6-foot-9, 245-pound power forward opened up his arsenal of skills and played a finesse game against West Virginia. Osetkowski, who got his “swagger” back according to Roach, buried 5-of-7 threes, often finishing in celebration. He excitedly yelled “Dub! Dub! Dub!” strutting into the tunnel postgame in reaction to the statement ‘W.’

It was the second most threes the junior has drilled in a game — the most since nailing seven in an overtime win over Iowa State on Jan. 1. Between that contest and his outing against West Virginia, he shot just 16-of-66 from three, but with the season on the line, the veteran delivered a complete performance. Osetkowski imposed his will as a defensive anchor and on the boards too, collecting a team-high eight defensive rebounds.

Nothing brings energy into the Erwin Center like a powerful, two-handed dunk. And even though Bamba wasn’t present in the lineup, authoritative slams were certainly present in Austin on Saturday morning and into the afternoon. The soft-spoken freshman Jericho Sims was Texas’ greatest momentum creator, finishing with five dunks in the overtime triumph.

“He just stepped up when his name was called,” Roach said. “He’s the most athletic person in the country and he showed it today.”

Sims’ first dunk occurred on an impressive drive and finish at the hoop. He finished an uncontested fast break with a slam and later caught an alley-oop from Roach. Sims’ sent in a two-handed throwdown to boost the Longhorns to a 65-62 advantage with 4:37 left to play, but his greatest work yet occurred in overtime. A driving Roach dished it off to Sims in the paint, and the power forward finished with a pivotal dunk with 2:44 left in overtime. The slam occurred in the midst of a 9-0 run and pulled Texas in front 78-74 — a lead the team would never relinquish.