No Bamba, no problem: Texas punches ticket to March Madness 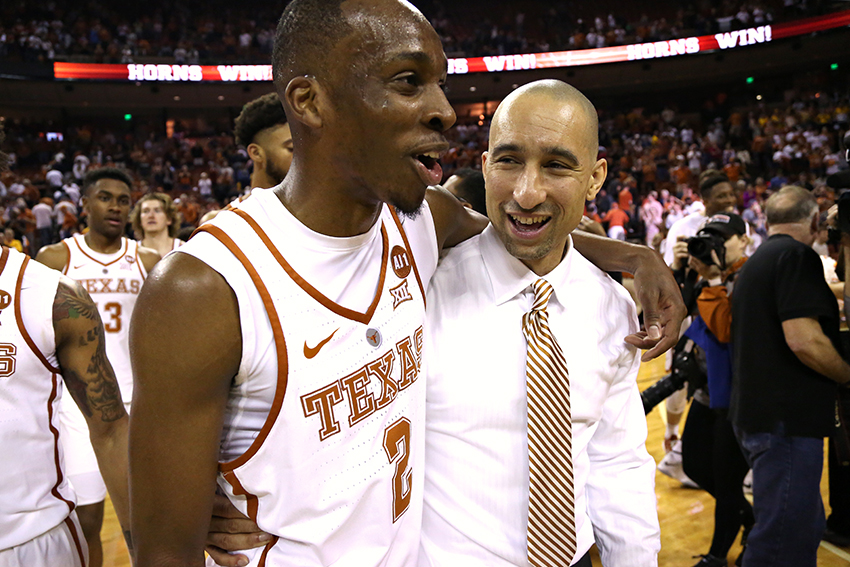 His celebration came after one of his five made 3-pointers. Texas — the worst 3-point shooting team in the Big 12 — connected on 57 percent of its tries from deep, the highest mark of the Smart era. The 3-point barrage led the Longhorns to a convincing win over No. 20 West Virginia, 87-79.

With junior Eric Davis Jr. and freshman Mo Bamba sidelined to shouting words of encouragement from the bench, freshman Matt Coleman poured in seven points in overtime to lead a shorthanded Texas team past the Mountaineers at home.

“We needed that win,” junior guard Kerwin Roach II said. “Not only for our postseason, but for our team.”

LIVE: Is Texas in March Madness? The chances sure skyrocketed after Texas' 87-79 overtime victory over West Virgini… https://t.co/Rs1xLS9jm8

In a fitting end to the regular season, Texas secured its fifth win over a ranked opponent, giving the team a 98-percent chance of making the NCAA Tournament, according to ESPN BPI.

Coleman and Roach scored 22 apiece and four players matched career highs in scoring as the Longhorns ran away with what had been a tight matchup through 40 minutes.

The name of the game all week for head coach Shaka Smart was to limit the Mountaineers to half-court sets. Don’t allow fast break opportunities, and don’t allow offensive rebounds. In the absence of Bamba, it was freshman forward Jericho Sims who anchored the defense for Texas.

“We knew we were really going to have to fight against West Virginia,” Smart said. “Because they make the game so physical. Every time down. We also knew there was a ton on the line. So what I told the guys last night is, we have to strike the balance between having incredible urgency but also playing aggressive, confident and loose.”

The first half was a dog fight for 20 straight minutes. The two teams committed a combined 16 fouls, including 10 from West Virginia, as every loose ball and every rebound was fought over with reckless abandon.

But early on, Texas was riddled with mistakes.

On the opening play, Osetkowski grabbed the rebound and looked to take off. A West Virginia player took no time knocking the ball out of the forward’s hands and glided into the lane to give the Mountaineers the first points of the game.

These types of missed opportunities came early and often for the Longhorns. On three separate occasions in the first half, Texas was in position to secure a defensive rebound but inexplicably lost control or had the ball stripped for an easy West Virginia bucket.

After settling down, it was Osetkowski who would give the Longhorns a lift. The forward buried three quick triples in the opening 20 minutes to keep Texas in control.

But as fast as the lead came, it went — and the short burst of momentum went with it. Texas committed back-to-back turnovers and fouled a shooter on a 3-point attempt to surrender the lead going into halftime.

“We focused on me and Snoop (Roach) being more together and together than Devon Carter and Daxter Miles,” Coleman said. “Those are really good guards on the other end, and today we made plays with the ball, off the ball, and it allowed us to get a victory at the end of the day.”

West Virginia again got into early foul trouble in the second half. Before three minutes had passed the team was on the board for four fouls. By 10 minutes, Texas was in the bonus.

Again it was Osetkowski who fueled the Longhorn offense. The forward buried two more triples in the opening six minutes of the period to tie the game for Texas at 48.

But down the stretch, similar to a week before, Texas found itself deadlocked. With six seconds left, Sims connected on one of two at the free-throw line to take a one-possession lead.

Six seconds proved to be too much time. Senior guard Jevon Carter raced down the floor and scooped in a difficult reverse layup. The final attempt from Texas was just off the mark, and the two teams headed into overtime tied at 72.

Overtime was all Texas. Fueled by Coleman, the Longhorns opened up a nine-point lead, punctuated by a reverse layup from the freshman with under two minutes to play. The Erwin Center was electric as the clock dribbled out, and Texas secured its most important victory of the season.

“West Virginia is a team, that, if you don’t stay connected, they can take your will from you,” Smart said. “We’ve experienced that a month and a half ago. They’ve done it to other teams too. So we had to stay together and have a level of pride and spirit to make sure we didn’t have our will taken from us.”