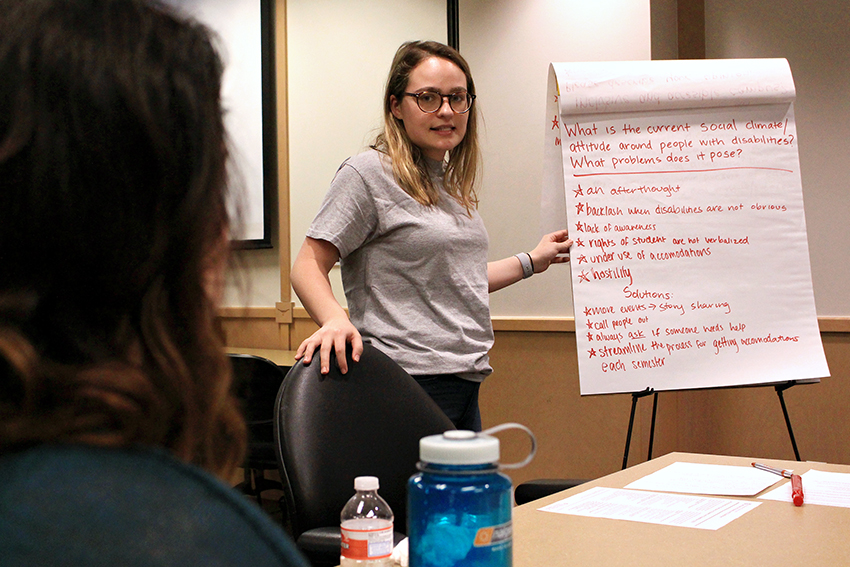 The Society of Professional Mediators, a campus group that usually helps individuals resolve conflict privately, opened its doors on Friday for a facilitated discussion surrounding accessibility on campus.

Geology junior Colin Davis, a mediator at the event, said he recognized accessibility issues while using a scooter to get around campus after an injury.

“Accessibility is not just limited to physical accommodations,” Davis said. “I realized (after my injury) that certain campus environments do force those who have a different ability to deal with conditions which aren’t always proper or conducive.”

Davis is one of 20 people taking the course Practicum in Conflict Mediation this semester. The students become certified mediators and may join the Society of Professional Mediators, which works to resolve conflicts on campus between students, faculty, staff and community members. The students served as mediators at the event and facilitated discussions between small groups of attendees.

The dialogue focused on accessibility because the UT campus is known for not being as being accessible as other major universities in the state, Davis said.

“Part of that is just an issue with geography,” Davis said. “And Speedway has now been geared toward walking, so the buses only run the perimeter of the campus.”

According to Davis, Texas A&M University has a system for getting qualifying students to and from classes, but no similar system exists on campus at UT.

Corporate communication senior Amanda Ostrove attended the event and said after breaking her ankle and dealing with the issue firsthand, campus buildings seemed up to code but some classrooms were more accessible than others.

“Some of my classes had ramps that made (rooms) easy to get to, but others were difficult to access the elevator, which sometimes made me late for class,” Ostrove said.

Ostrove said she couldn’t imagine the feelings of frustration of those who deal with the inaccessibility permanently.

Susannah Hootman, nursing sophomore and event mediator, said she didn’t expect anyone attending the event to act insensitively toward the issue of accessibility but instead, the mediators’ roles would be helping progress the conversation.

“To facilitate means to make easier, and that’s what we do,” Hootman said. “We’ve seen roommates who have been best friends since second grade and end up breaking their lease because dishes are piling up in the sink. Conflict can be expensive and damaging to an environment.”