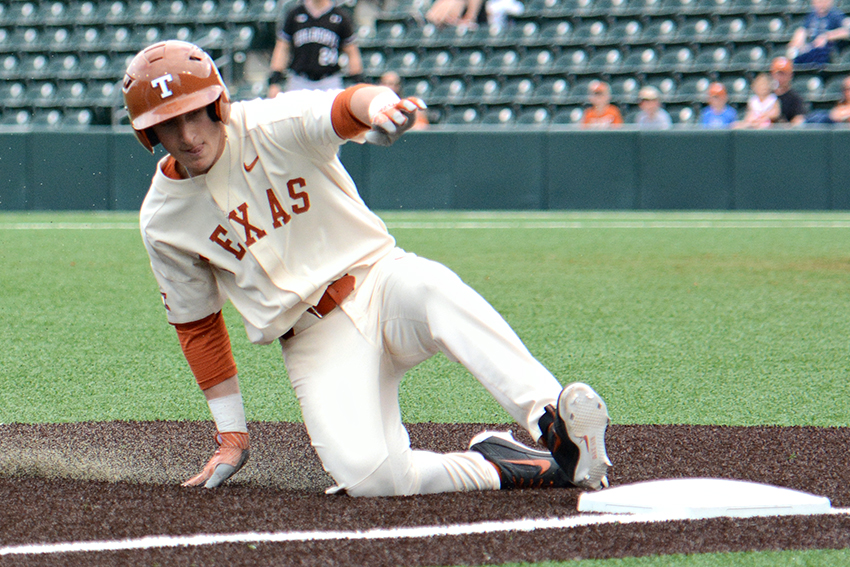 After the Longhorns’ 6-2 loss to Northwestern on Friday night, Texas head coach David Pierce was blunt when assessing his team’s performance.

“We just got our butts kicked,” Pierce said.

But while Texas may have started the four-game series on the wrong side of a “butt-kicking”, the roles were reversed the rest of the weekend. Over the final three games of the series, Texas piled on 38 runs and outscored the Wildcats by a 27-run margin, winning each contest decisively.

“After that first game, we talked as a team and that wasn’t us,” junior infielder Masen Hibbeler said.  “We talked to Coach Pierce, and we said let’s just come out, keep the hammer down and let’s dominate.”

The series opener saw the Longhorns fail to take advantage of opportunities early. The team stranded eight runners on base over the game’s first five innings and struggled with runners in scoring position.

Northwestern didn’t have such problems. The Wildcats took advantage of an up-and-down day from junior pitcher Chase Shugart, tacking on five runs in six innings to take control of the game.

But any momentum the Wildcats had going into the weekend quickly evaporated on Saturday. In the first game of a doubleheader, Texas pounced, notching two runs in the contest’s first inning.

Northwestern rallied to take a 3-2 lead in the third, but the advantage was short lived. A two-run homer by sophomore infielder Ryan Reynolds put the Longhorns back on top in the fourth, and Texas used a huge four-run sixth inning to put the game away.

“I think the best thing was the ability to flip the momentum early,” Pierce said. “To get an early lead in game one on Saturday was the key. One got away from us Friday night, and we can’t dwell on it. We did a great job on that.”

The Wildcats out-hit Texas in the game, but the Longhorns took advantage of three home runs to cruise to a 10-7 victory.

With the way sophomore pitcher Blair Henley threw the ball, there was no danger of Texas being out-hit in the second game of the doubleheader. Blair pitched six shutout innings, striking out four batters and allowing only two hits.

The Longhorns gave Henley more than enough run support. Texas piled on a season-high 16 runs on only 10 hits. The duo of junior infielders, Hibbeler and Kody Clemens, paved the way for Texas. The two and three hitters combined for seven RBIs, and Clemens had his second consecutive game with a homer.

“We’re starting to click on offense, and we just hope to keep that rolling,” Hibbeler said. “Hitting on the top of this order is fun. Me and (David Hamilton) get on base quite a bit, and Kody (Clemens) can knock us in. The rest of our lineup has great control too.”

On Sunday, Texas ended the series with an exclamation point. The Longhorns exploded for a 12-1 victory that was called after seven innings. The Longhorns jumped out to a 6-1 advantage by the third inning and coasted the rest of the way.

Reynolds hit his second home run of the series, a solo shot in the sixth, and four players had multi-hit games.

“There’s a lot of power between the whole team,” Reynolds sad. “(Everybody) can put one out. That’s going to be fun to watch as we start rolling and playing good competition.”

Texas will have a chance at some “good competition” this Thursday, as it opens a four-game series against a Stanford team that’s won 10 of its first 11 games.