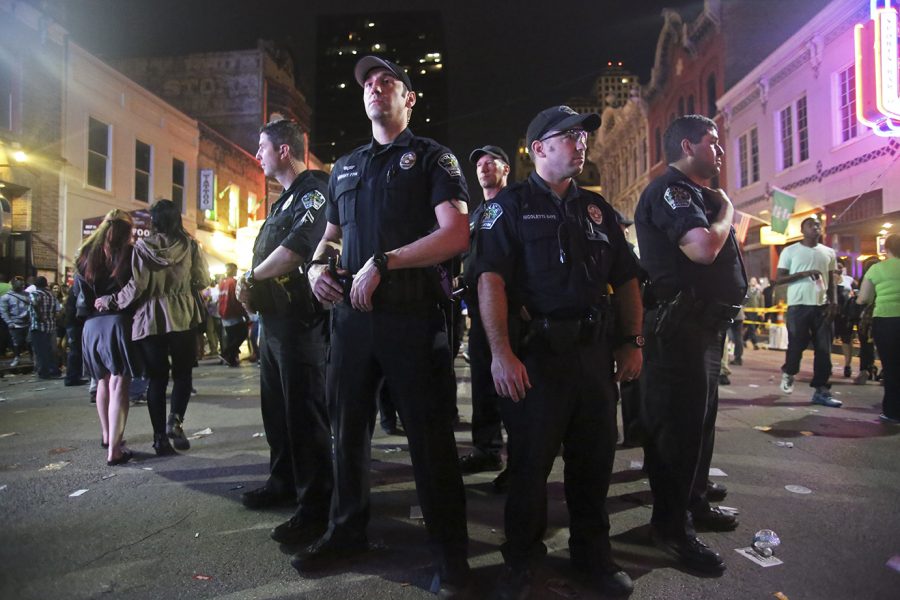 Austin city officials met Monday to outline traffic and safety plans for the annual South by Southwest festival, which will begin Friday, and other spring festivals.

The city of Austin welcomes up to 400,000 people during SXSW and the festival season, said Bill Manno, special events program manager.

“The interest in Austin for businesses and corporations to come and market their products and have a good time for their clients and employees is growing in popularity every year,” Manno said.

During SXSW the city sets up Central Command — which is an event operation center with screens to help monitor traffic — cameras and downtown high activity location observation (HALO) cameras, Manno said. The center also hosts representatives from city offices, the FBI and SXSW to monitor and address any issues that may arise.

Barricades will be placed around downtown with patrol vehicles and officers, said Justin Newsom, assistant chief for the Austin Police Department. Road closures will begin at noon on most days and end between 3 a.m. and 6 a.m.

“We ask of course that the public be patient,” Newsom said. “It’s going to take longer to get where you need to go, there’s no way around that. We are doing the best we can to make sure it flows the best possible way.”

Newsom said drivers also need to watch out for pedestrians, since most visitors to downtown will be on foot.

“We all know people come here to party, they come here to drink, they come from out of town to have a good time, and they’re probably not thinking about their own safety in regards to walking,” Newsom said. “We ask that the driving public take that responsibility.”

Starting March 14, during the music portion of SXSW, about 120 officers will be on Sixth Street, Newsom said. These officers will consist of the entire APD Special Response team and additional officers.

Even though APD has safety plans in place for SXSW, Newsom said the public needs to report any issue or concern to 911.

“Despite all of these plans that we have in place, there is no plan that is better for security than just good vigilance by people who are out and about on the streets,” Newsom said. “Don’t let this festive occasion make you think that you don’t have to worry about those things. You always should be paying attention to where you are, you should not get so intoxicated that you cannot do so.”

“We will have a large EMS presence in the downtown corridor, correlated with the music part of SXSW during spring break,” Hopkins said.

A geofence, virtual geographic boundary, will also be enacted in the Sixth Street, Rainey Street and Warehouse district area to bounce all 911 calls to Central Command and avoid touching the 911 call center, Hopkins said.