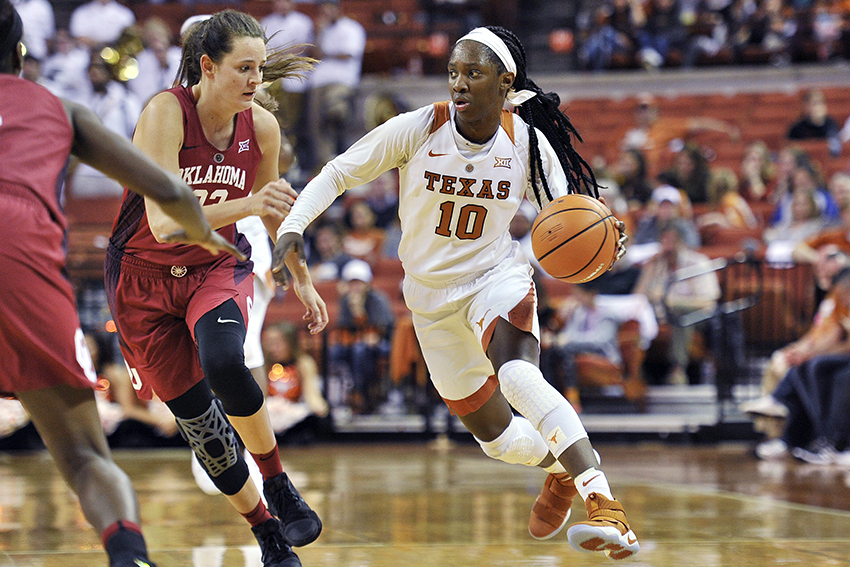 Lashann Higgs had one less thing to worry about.

In No. 8 Texas’ past two games against No. 2 Baylor, Higgs was assigned to Baylor senior guard Kristy Wallace on defense. It didn’t go well for Higgs.

Wallace used her turbocharged first step to blitz past the Longhorns’ defensive stopper nearly every other possession. Wallace put up 27 and 23 points, respectively, en route to a pair of Baylor victories.

“The two previous games that we’ve played, particularly the first one against Baylor, I thought we were not as competitive as we needed to be,” Texas head coach Karen Aston said.

But on Monday night in Oklahoma City, Wallace didn’t step on the floor in Texas’ 77-69 loss to the Bears in the Big 12 championship game. Wallace suffered a torn ACL in her right knee on Baylor’s senior night against West Virginia on Feb. 26 and was ruled out for the season.

With Wallace out, Higgs had less responsibility for Texas on the defensive end. She turned her attention to the opposite end of the floor.

Higgs had a penchant to score in threes. She kicked her evening off by draining a 3-pointer from the left corner. She followed it up by splitting a pair of Baylor defenders, drawing a foul from Baylor sophomore guard Juicy Landrum, scooping in a layup and converting the and-one free throw.

By the end of the first quarter, Higgs had 11 points on 4-of-5 shooting.

Her offensive punch bookended multiple runs for Texas. The Longhorns hit a rough patch,  making just 1-of-8 shots. Higgs zipped to the hoop late in the shot clock and rose for a layup, but she was met by Baylor junior center Kalani Brown.

The ball rimmed out, but Higgs secured the offensive rebound and went straight back up. She drew a foul and hit a pair of free throws to cut the Bears’ lead to three points.

Later in the fourth, Higgs swiped the ball from Landrum at half court and sprinted to the basket. Landrum recovered just in time to swat the ball away on the fast break. Higgs kept her cool. She recovered the offensive board and found senior guard Brooke McCarty on the right side of the lane for the easy finish.

Higgs’ assist was part of a 9-0 run for Texas that tied the game up at 55 points apiece with 7:13 remaining. Everything unraveled from there.

The Bears eventually took back the lead. Higgs drove down the baseline again with 1:42 left on the clock and the Longhorns down two. She floated the ball a step outside the lane, wary of Baylor sophomore forward Lauren Cox, who had seven blocks.

The ball ricocheted off the rim and into Cox’s hands. Sophomore forward Joyner Holmes tried swiping it back but was called for a loose ball foul, sending Baylor into the bonus. The call unnerved Aston. She let the officials know it and picked up a technical foul.

Cox hit all four of the ensuing free throws.

“I had a poorly, poorly, poorly timed technical that I take full responsibility for,” Aston said. “Definitely my fault on that one.”

“We still felt like we had a chance (to win),” senior guard Ariel Atkins said.

They didn’t. Though Texas fought hard until the end, Baylor closed the game out and won its eighth Big 12 championship in nine years. Higgs finished with 20 points, seven rebounds and three assists in a game that saw 14 lead changes.

Despite the loss, the Longhorns still believe they’re talented enough to beat any team in the country. The next loss will be the last in the NCAA Tournament.

“I mean, this loss is disappointing,” McCarty said. “But, we have a bigger picture to look forward to.”