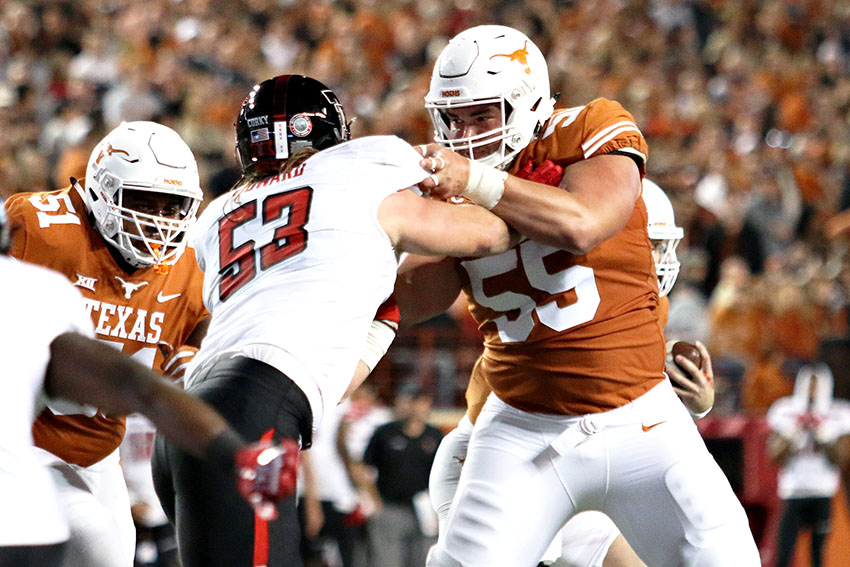 The eyes of Texas, and those of NFL scouts, were upon 336 of college football’s elite at the 2018 NFL Combine this past weekend in Indianapolis, Indiana, where prospective NFL draftees showcased their talents to scouts from all 32 NFL teams.

Among the 336 athletes, six Longhorns earned invites to the event.

“I think this is pretty cool,” inside linebacker Malik Jefferson told the Austin American-Statesman. “Not a lot of guys get to do this. To be in front of a crowd on national television with people watching, I’m soaking in the moment and realizing the blessings I have received.”

Among the weekend’s events were the 40-yard dash, vertical and broad jump, bench press and shuttle run.

Offensive linemen and linebackers had their workouts during the first part of the weekend, and defensive backs wrapped up their workouts on the combine’s final day.

Scouts had their doubts about Williams, who is coming off surgery for a meniscus tear and MCL and PCL sprain, which he sustained early in the 2017 season. After returning to play in Texas’ last two regular season games, Williams had an impressive outing in Indianapolis this past weekend.

Williams posted the fifth-fastest 40-yard dash time for an offensive lineman at 5.05 seconds and sported the best vertical jump for his position at 34 inches, showing no sign of sluggishness in his step following his recovery.

But a transition from college football to the NFL could not only result in an initial decrease in on-field action but also a potential change in position for some niche players. Williams, a tackle by nature, could possibly be forced to play guard at the next level.

“Personally, if you asked me, I feel like I’m a tackle,” Williams said in an interview at the combine. “But I’m willing to play anywhere a team needs me.”

The combine can also serve as a validation for a player’s decision to declare for the draft, as a strong showing indicates readiness to play at the next level.

For Elliott and Hill, this was exactly the case. Playing in a conference which relies heavily on offense, some scouts saw their numbers, especially Elliott’s six interceptions, as inflated. In addition, Elliott’s decision to go pro comes after his first season as a regular starter, and this could put some doubt in scout’s minds.

The defensive back duo made their presence on the field at Lucas Oil Stadium known. Elliott hit 15 reps on the bench press, besting Thorpe Award winner and Alabama safety Minkah Fitzpatrick. The speedy Hill clocked a 4.49 40-yard dash.

Texas’ NFL prospects will have another chance to shine under the keen eye of NFL scouts and general managers when the Longhorns host their annual Pro Day in Austin ahead of the NFL Draft.

Until then, it’s business as usual.