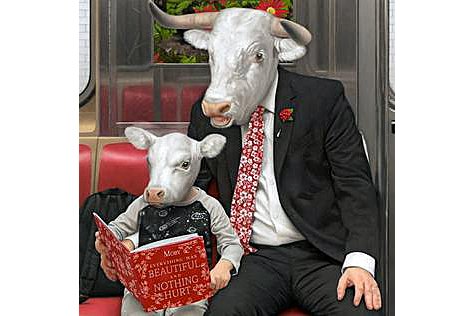 After a series of mediocre releases, Moby’s Everything Was Beautiful and Nothing Hurt delivers a sound reminiscent of his early ’90s electro vibes, creating an album that is guaranteed to have listeners crying in the bathtub.

Regarded as a pioneer of electronic pop, Richard Melville Hall, better known as Moby, has been producing music since the early ’90s, ruling the New York club scene though the 2000s. After a number of disappointing albums, Moby goes back to basics with his 15th studio album, Everything Was Beautiful and Nothing Hurt. With the signature slowed electronic beats and iconic, uncomplicated repetitive lyrics of earlier work, Moby’s latest project features depressing, woeful themes of loss and sorrow, diverse instrumentals, cohesive climactic pieces and powerful lyrics that, despite suffering from occasional repetitiveness, make for a compelling listening experience.

The first three songs on the album establish a dreary mood. The album’s opener, “Mere Anarchy,” boasts  ominous electronic samples accompanied by repetitive spoken lyrics, making the song feel like the theme for a movie villain. The following song, “Waste of Suns,” employs a more dance-y beat, but its echoed crashing and vocal “ohhs” laced in the background create a grim tone. “Like a Motherless Child” follows this trend by using a more driven, attitude-heavy beat for the same effect.

Moby’s strength as an artist is his ability to create immersive soundscapes through the way he blends the different elements of each song. The song “This Wild Darkness” contrasts mournful lyrics such as “I can’t stand on my own anymore”  with a choir-esque chorus to paint the image of a man in distress, reaching for an escape from his sorrows. Similarly, the ballad “The Ceremony of Innocence” gains momentum and intensity as it  progresses. Beginning with a pensive piano loop and woeful lyrics delivered by Moby, drums and eventually a symphonic background are added with every verse, building to create a complete composition that accurately communicates the pain of realizing loss.

While songs with simple, repetitive lyrics are found throughout Moby’s works, Everything Was Beautiful and Nothing Hurt features a handful of pieces full of lyrics, making them the most emotionally impactful. A prime example of this is the somber “The Middle Is Gone.” Lyrics such as  “I’ll never be free. Always plagued by what I’ll never be” are accompanied by pensive piano-driven instrumentals and embody Moby’s hopeless sentiments on not being enough.

As effective as Moby is in creating a sound that so accurately communicates depressing, hopeless sentiments, the lack of diversity in the themes make listeners feel as if they’ve listened to the same song multiple times. The similarities of the songs “The Sorrow Tree” and “Welcome to Hard Times” perfectly convey this notion. Both are built around somber instruments that rely on high-pitched female vocals for relief. While this may work once, this exact structure is used throughout the album and the overall effect is diminished.

One must really be in the mood for a downer to want to sit down and listen to all of Everything Was Beautiful and Nothing Hurt. With his 15th studio album, Moby effectively portrays deep sorrow and hopelessness with justice despite suffering slightly from occasional repetitiveness. While it may not be an appropriate album for everyday listening, it does what it sets out to do