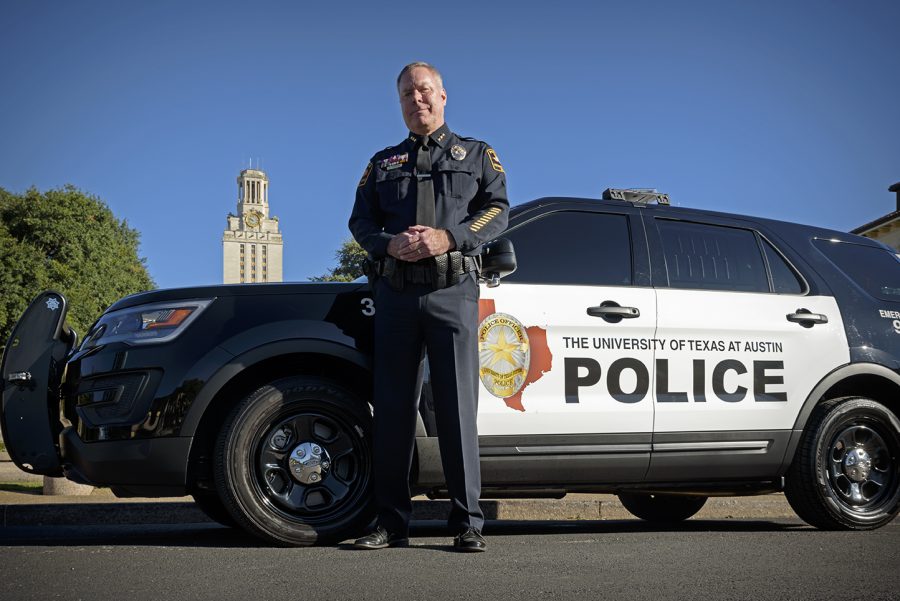 The recent losses of Haruka Weiser and Harrison Brown have left a mark on campus and changed how UT-Austin students perceive their own safety. However, UT-Austin’s placement in one of Texas’ largest cities does not mean UT is not a safe campus, said David Carter, UT Police Department chief of police.

“What happens for an urban campus is that all the complex issues that occur in an urban city are occurring all around us,” Carter said. “But by and large … despite the fact that we’ve had two tragic homicides over the past couple of years, (UT) is a relatively safe campus if you compare it to similar campuses in big cities around the nation.”

The Texan compared crimes that occurred on and off of these nine campuses in 2016 and calculated the rate of crimes per 1,000 students. The universities were chosen by their city population. College campuses which receive federal funds are required to comply with the Jeanne Clery Disclosure of Campus Security Policy and Campus Crime Statistics Act. This law requires campuses to be transparent about crimes in specific geographies: on campus, public property and off campus, said Laura Egan, senior director of programs for the national nonprofit Clery Center.

“It’s built and structured as a federal consumer protection law, so it’s designed to make sure that the services being rendered by the campus are transparent,” Egan said.

The Clery Act requires college campuses to release an annual security report, detailing specific crimes such as sexual offenses, robbery and aggravated assault occurring within the geography of the campus specified.

Compared to schools with the highest city populations, UT-Austin has a violent crime rate of 0.25 violent crimes per 1,000 students, which is lower than UH by 0.15 and UTSA by 0.08.

UT-Austin has the highest aggravated assault rate per 1,000 students at 0.35, with the average assault rate across the universities at 0.15.

The death of dance freshman Weiser accounts for the only murder and nonnegligent manslaughter among these Texas universities in 2016.

The highest rate of arrests for drug violations come from schools such as UNT at 7.38, and Texas Tech at 6.84. These two universities are located in cities with considerably smaller populations than Austin. UT-Austin’s rate is 1.98.

On an ordinary day, more than 80,000 people are on campus, Carter said. This high population and the occurrence of incidents on and off campus have caused UTPD to evolve.

“No single police department can tackle all of its issues by itself,” Carter said. “(We) pride ourselves in our partnerships that we do have with (the Austin Police Department) and (the Department of Public Safety).”

The number of UTPD authorized officers increased from 67 to 104 since Carter’s arrival in 2013, Carter said, which has increased police visibility and the number of officers in on and off campus patrols. UTPD covers eight patrol districts, six on campus and two off campus, each consisting of a patrol officer at all times, Carter said.

UTPD has been looking to improve its communication with the University community, Carter said. The 2017 on-campus fatal stabbing that resulted in the death of Brown, an undergraduate studies freshman, sparked concern from students about UTPD’s timeliness when sending out emergency notifications.

According to the Clery Act, institutions are required to release an emergency notification whenever there is an “immediate” threat to campus.

Due to student activity and the number of students who live off-campus, UTPD broadened its alert system earlier this semester to include incidents occurring off-campus.

Similar to UT-Austin, UH Police Lt. Bret Collier said UH is like a city within itself. UH also works with the city police department to keep abreast on incidents on and near campus. The department has about the same number of authorized police as UT-Austin, despite UH being located in a larger city. When it comes to police visibility, UH takes a look at UT-Austin as an example.

“We’ve looked at what they’ve done and what other schools have done to try to form improvements in our own area,” Collier said.

UT-Austin’s location in one of Texas’ biggest cities is not lost on biology senior Rachel Mastin. Mastin said she appreciates UTPD for making notable changes such as increasing patrol and keeping students up to date on events.

“I just think they need to (make sure to) continue those efforts because they’re on the right track,” Mastin said.

Weiser’s death has heavily affected the Department of Fine Arts to the point where spaces near the location of her murder have become emotionally charged, said theater graduate student Jessica Lowerre.

“We don’t stage works of art down there, we don’t generally lead classes down there,” Lowerre said. “It’s a really kind of emotionally heavy space.”

Classical languages junior Rachel Prichett had a first-hand account of the 2017 on-campus stabbing. Prichett said she saw a man wielding a knife stab a student as she was running
away from the chaos.

“Hopefully nothing that scary will happen on our campus ever again, but I want students to remember that it could,” Prichett said in an email. “Don’t be fearful, but be aware of your surroundings and understand that bad situations can arise.”