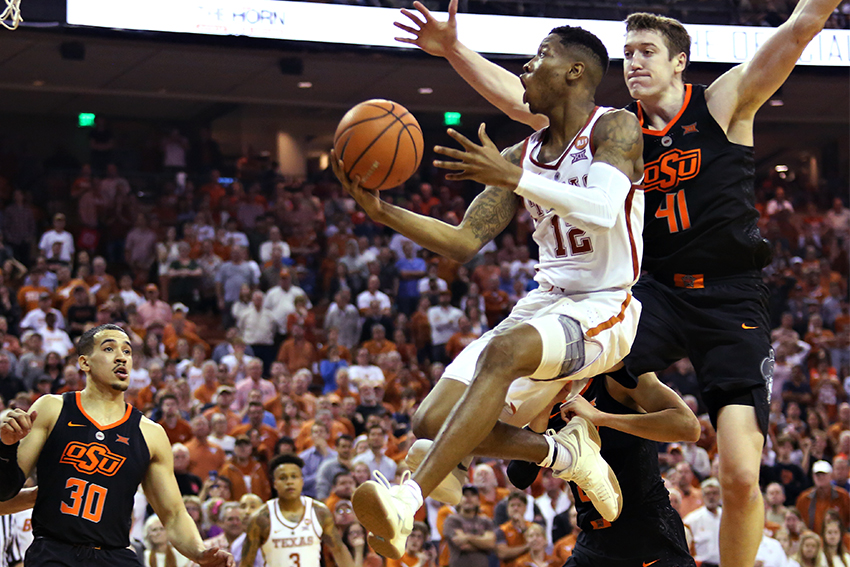 College basketball postseason is upon us, which means it's the time of year when we can expect to see the March Madness hoopla translate into a greater intensity on the court — and a few more bruises and bloody noses as a consequence.

That intensity was made all too apparent to Texas junior guard Kerwin Roach II last night when he went in to challenge a ball-handler and came out with a chipped tooth.

I bet Kerwin Roach will wear a mouth piece from this moment on… #ToothKnockedOut #Big12MBB #Ouch pic.twitter.com/ZkaIlOHgD8

The Longhorns were in the opening minutes of their 68-64 win over Iowa State in the first round of the Big 12 Tournament when Roach found himself one-on-one with Cyclones guard Lindell Wigginton on the perimeter. Wigginton attempted to penetrate. Roach pursued and caught a mouthful of elbow in the process. The blow was enough to inflict wincing pain and send one of Roach’s dentures sailing across the hardwood.

Fortunately, the tusk was retrieved by teammate Matt Coleman, and Dr. Bill Busch, team dentist for the Kansas City Chiefs, was on duty to patch up Roach’s war wound.

The injury did not keep Roach off the court for long. He ended up logging 37 minutes, nine points, six rebounds and seven assists in the Longhorns’ victory.

The two-year starter will be in the lineup for Thursday’s second round game against Texas Tech with a perfect set of pearly whites.

Kerwin Roach shares some insight on his broken tooth after the game. Coach Smart added that a Kansas City Chiefs doctor came in and glued the chip to his tooth at halftime. #Big12MBBToughness pic.twitter.com/Q7bAS3lVRC