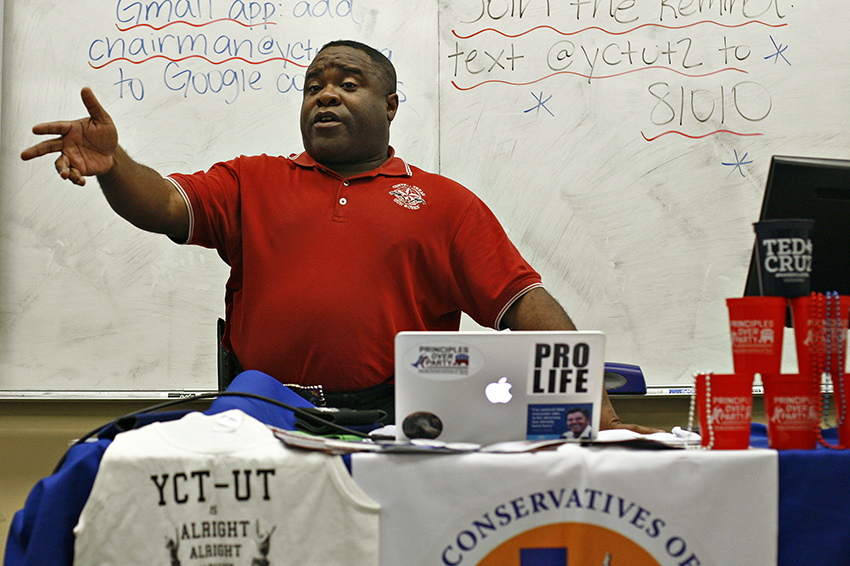 About 30 people attended the event, called “Why Teenagers Shouldn’t Make Gun Policy.” Cargill, a guns rights activist, addressed some of the policy proposals suggested in a statement released by Dick’s Sporting Goods on Feb. 28. The statement called for universal background checks, raising the minimum age to purchase any kind of firearm to 21, and a ban on “assault style firearms” and bump stocks, which are attachments on rifles that speed up the rate of firing.

Cargill said banning the AR-15, the type of gun used in the Feb. 14 shooting at Marjory Stoneman Douglas High School in Parkland, Florida, that left 17 dead, was an unrealistic proposal and would not make a dent on the number of gun-related deaths.

“More people die by hand guns than long guns,” Cargill said. “There are so many guns in this country, there is no way you’re going to get rid of them at all. There are also other ways people can do things if they are dead set on hurting others. (In the Oklahoma City bombing,) Timothy McVeigh killed 168 people and wounded 680, and he used a bomb (made from) stuff that he purchased from Home Depot.”

International relations sophomore Bethany Gonzalez said the event was a good place to learn about a topic that may not be discussed elsewhere on campus.

“Mr. Cargill was very knowledgeable,” Gonzalez said. “I didn’t know about much about the background checks and the information on bump stocks and so he was able to enlighten me on that.”

Saurabh Sharma, YCT’s director of events, said in light of the Parkland shooting, the conversation on gun control should involve expert input.

“I empathize greatly with the people who were in a very traumatic situation, but the fact remains — hearing what a gunshot sounds like doesn’t make you an expert on it,” biochemistry junior Sharma said. “‘Think of the children’ is always a useful political tool, and when its coming from the child’s mouth, it is always more effective as well. So we figured we would bring in the opposite of (someone like) David Hogg to come and talk about it. We’d bring in an adult who is a firearms expert, a firearms owner and activist.”