It’s hard not to ‘Love, Simon’ in compelling LGBTQ rom-com 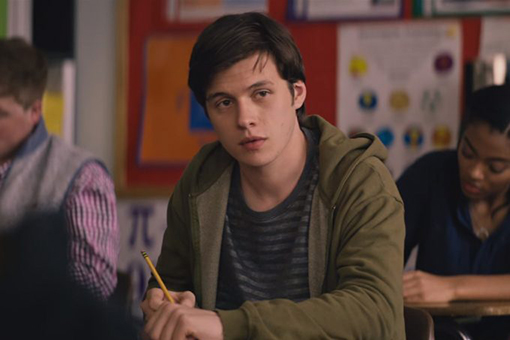 “Everyone deserves a great love story” is one of the more fitting taglines in film.

“Love, Simon,” directed by Greg Berlanti and based on  the novel “Simon vs. the Homo Sapiens Agenda,” comes with great intentions. As an alternative to prestige pictures such as “Call Me By Your Name” or “Moonlight,” this film attempts to tell an LGBTQ story through the lens of a mainstream romantic comedy and succeeds with a surprisingly sweet story.

Our lead, Simon Spier (Nick Robinson), is an average teenager. He has loyal friends (Katherine Langford, Alexandra Shipp and Jorge Lendeborg, Jr.) and parents who shower him with love (Josh Duhamel and Jennifer Garner), but he’s been keeping a secret from them for the past few years: He’s gay.

When he starts receiving emails from a fellow closeted teen, known anonymously as “Blue,” he quickly falls deep in love. However, this is all put in jeopardy when classmate Martin (Logan Miller) discovers his secret and blackmails him in an attempt to get Simon to set him up with his friend, Abby (Shipp).

Between dealing with the mystery of Blue’s identity and trying to keep his world from changing with the discovery of his secret, Simon is a compelling hero. Conversely, he’s played wonderfully by Nick Robinson, who exudes a charisma without which the rest of the film wouldn’t work quite as well. Equally as good are Langford, Shipp and Lendeborg, Jr., who all carry distinct personalities that never devolve into quirks, portraying the friends we did have, or could have had, in high school.

Unfortunately, Miller’s Martin is a bit of a pantomime villain, acting somewhat like a cartoon caricature than a complex character. He’s offset by Duhamel and Garner, who provide a wallop of heart as unconditionally caring parents who can be overbearing but good-intentioned.

These performances would be nothing without a dynamite script by Isaac Aptaker and Elizabeth Berger. Chock full of one-liners and genuine humor, there’s barely a moment that doesn’t work. The script doesn’t reinvent the wheel, but it doesn’t need to because the writing is so tight, coupled with very capable direction from Berlanti, who has traditionally been best known for his television work. Without question, the film really sings during its emotional moments, which pack a significant emotional punch that feels true to the struggles of coming out. An important conversation between Simon and his parents is incredibly raw, not succumbing to over-sentimentality and instead opting to capture Simon’s internal struggle.

By the end of the film, it’s joyous. With the finale set atop a Ferris wheel, audiences of all kinds will be cheering for Simon as he finally meets Blue, effectively tying together a well-told, engaging love story.

By being content with telling a simple love story, “Love, Simon” excels.

Berlanti refuses to talk down to Simon’s predicament or make him a figure of pity. Instead, he has decided to give the LGBTQ community a rom-com of the mold that straight people have been getting for years. This serves to normalize a community that even still faces prejudice, but beyond that, the film is just straight-up entertaining.

“Love, Simon” is a welcomed surprise. It’s a tight, clever romantic comedy that’s equal parts visibility and quality. Everybody deserves a great love story, and “Love, Simon” is it.