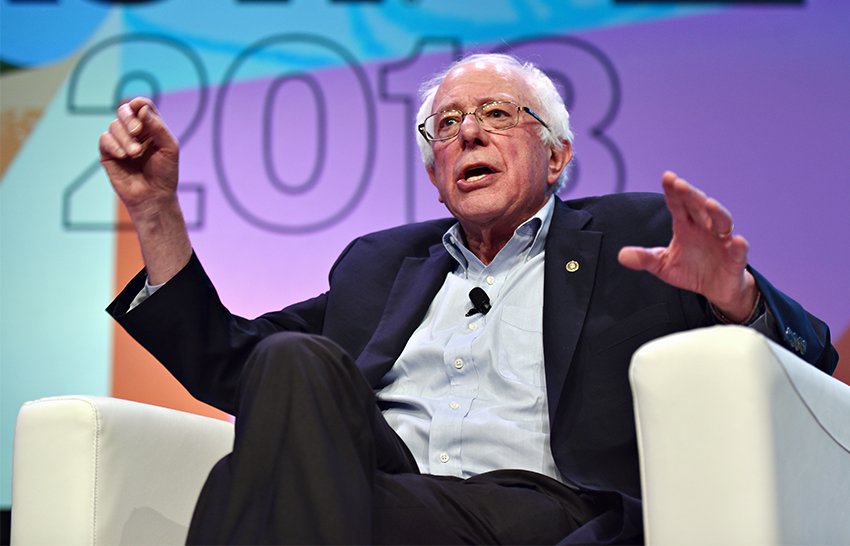 Senator Bernie Sanders made his SXSW debut with an interviewer he is familiar with, CNN Chief Washington Correspondent and host of the weekly political talk show “State of the Union”, Jake Tapper.

With the chutzpah he is known for, Sanders promised to talk about important political issues that affect everyday Americans, and not the sensational stories covered by mainstream media, a criticism of the press he brought up throughout the interview.

“We have a lot of people in this country who are hurting and when they turn on the T.V they want to see some reflection of their reality,” Sanders said.

“You keep mentioning her name,” Tapper said, to which Sanders replied, “Not as much as CNN does.”

“I don’t deny that this is an important issue, president being sued by a pornographic actress, but whether it should be on day after day is another thing,” Sander said.

Tapper casually guided the conversation through topics currently in the center of American and Texas politics, like gun control and the repeal of the Deferred Action for Childhood Arrivals program.

Sanders said he supports harder background checks in the purchasing of firearm as well as banning assault rifles. Sanders also explained that he voted for the president’s proposed border wall on the Mexican border, what Sanders considers, “one of the stupidest ideas in the history of the world,” because the same bill protected recipients of DACA.

The interview also explored foreign policy and the ongoing proxy war in Yemen, which the senator made another point about the mainstream media’s failure to cover important political  issues.

“It doesn’t get a lot of attention,” Sanders said. I think it’s fair to say most Americans are not focused on Yemen.”

Looking forward, Sanders encouraged working class Americans to vote in the 2018 primaries. He dodged a question on the possibility of running for president in 2020 and said instead he is focusing on the present.

“The reason why we are going to conservative areas is to really rally people around the progressive agenda so that the Democrats can win the house and the senate in 2018, Sanders said. “That’s my focus now.”

Tapper mentioned Sander’s commentary on the “outrageous” campaign against Laura Moser in Texas’ seventh congressional district after the Democratic Campaign Conference Committee attacked the Democratic candidate for disparaging remarks about the state she is said to have made in the past. Sanders responded with another criticism of the American press and government.

“I detest that type of politics and I think most Americans do,” Sanders said. “The DCCC is engaging in negative attacks against a responsible candidate, that is absolutely unacceptable and has got to end.”

Rather than sensationalise candidacy and inspect their personal lives, Sanders suggests government groups as well as journalistic organizations should focus on a candidate’s competency and let the public make character judgements for themselves.

In the end, Sanders encouraged Americans to unite for the greater good, to fight bigotry and to vote. He said that the country’s history of prejudice is neither unique nor is it over yet, but it’s important for Americans to keep fighting for a better status quo.

“We as a nation need to stand together, fight for working families, and fight for an agenda that works for all of us – not just the people on the top.”