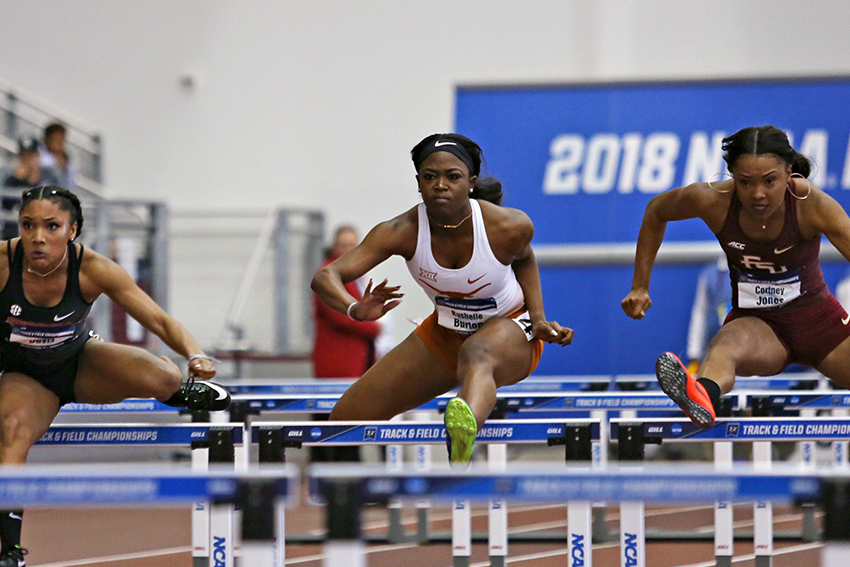 COLLEGE STATION, Texas — Athletes from universities around the nation gathered at Texas A&M on Friday to open day one of the NCAA Indoor Championships.

Schools sent their best to compete for a national championship. For Texas, however, the upsets needed for that opportunity could not be pulled off. The three women who competed for Texas all finished sixth or lower in their respective events.

Junior Teahna Daniels was the first Longhorn to compete. Her event, the 60-meter dash, is one that she has not only been able to be competitive in but also win, as she did in 2016. On Friday, Daniels ran in lane one and finished in a respectable 7.24 seconds.

Her time was consistent with the range of times she has produced all season long. But Daniels’ time was not enough to lead her to the top of her heat, as she finished sixth and failed to qualify for the finals.

The second and final event of the night for the Longhorns featured both senior Pedrya Seymour and sophomore Rushelle Burton. The Big 12 Championships saw the duo finish first and second. Friday, they finished sixth and seventh, respectively. Seymour finished 10th overall and .01 seconds away from qualifying for Saturday’s final.

Seymour revealed after the race that she had battled a hamstring injury coming into the NCAA Championships.

“I’ve been battling a little hamstring injury, so that was on the back of my mind,” Seymour said. “I strained it at Big 12, ran a fast time and actually won on it. But injuries sometimes mess with your confidence, and I think that played a part in my performance today.”

Despite the injury and the disappointing finish, Seymour didn’t want to let that affect her moving forward. Her goal now is to come back at the start of the outdoor season healthier and stronger.

“The only thing you can do is bounce back,” Seymour said, “and I know how to bounce back.”