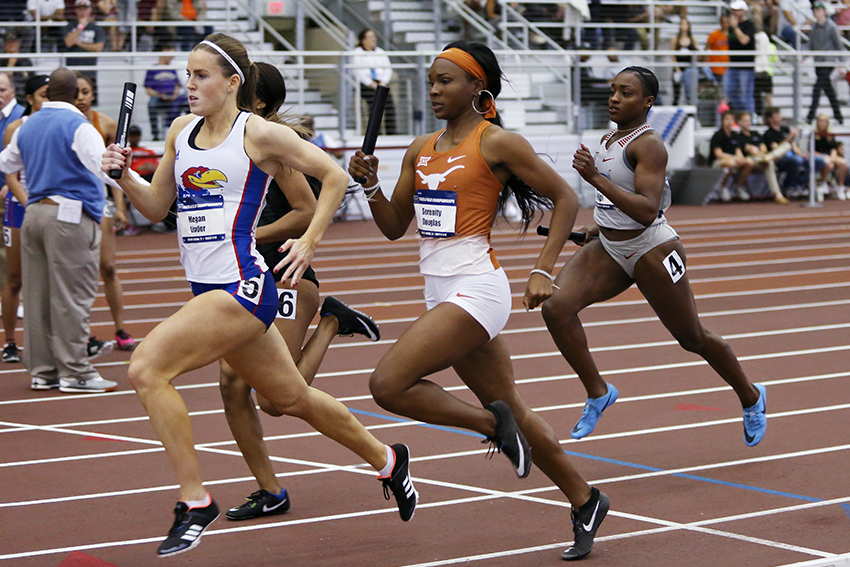 COLLEGE STATION, Texas — Disappointment was the underlying theme over the past two days at the NCAA Indoor Championships for the Longhorn women.

On the first day, Texas had three runners compete. All three competitors were in the top three at the Big 12 Championships. But none of them were able to place higher than 10th in the standings in College Station.

Texas interim head coach Tonja Buford-Bailey was disappointed, but she was less than shocked at the performance.

“The women didn't come in strong at all. The expectation was for them to try and come in and see if we could get somebody in the finals,” Buford-Bailey said. “We weren't successful in that, but like I said, they didn't come in as a strong team from the start.”

With the shortcomings on Friday, the attention and pressure of putting points on the board shifted to senior pole vaulter Kally Long and the 4×400 relay team on Saturday.

Long finished in 13th place in the pole vault with a clearance of 4.21 meters. On her third and final attempt, Long was unable to reach the pole and had to bail early.

“It was kind of a risky move,” Long said. “I actually went up a pole on that last attempt. I ran in guns blazing, which actually messed me up for my takeoff.”

Despite the low finish, Long was still optimistic.

“I’m happy with my performance based on the fact that I injured my arm on Thursday,” Long said. “I’m proud of myself for overcoming the pain each and every jump.”

After Long’s performance, the only event left for the women was the 4×400 relay. The expectations for the team weren't astronomical. They came into the race seeded 16th after the NCAA expanded the group from 12 to 16.

But the relay team was still able to bring a little light to the weekend. Their time of 3:33:06 was good enough to win their heat, which was the first of four, and set a season best. They eventually finished eighth, with USC taking home the crown with a time of 3:27:45. The top-10 finish was the only one of the meet for the Texas women.

Overall, the weekend put a damper on a season that consisted of a Big 12 championship and several personal and school records set. Leaving College Station with only one top-10 finish for the entire weekend is not the way Texas wanted the season to end.

With the indoor season now closed, the focus turns to the outdoor season, which begins March 16 at the UTSA Invitational in San Antonio.

“We’re going to have to regroup for outdoors and make sure we can get on the podium in some events in the outdoor meet,” Buford-Bailey said.