“Blockers” has some huge laughs that frequently undercut its heart 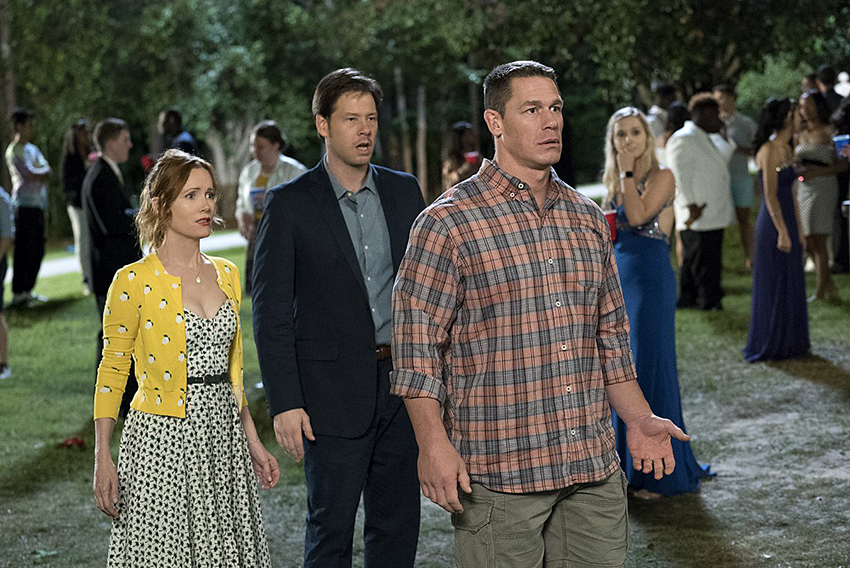 If movies were judged on good intentions, then “Blockers” would get a full five stars.

First-time director Kay Cannon, best known as the writer of the “Pitch Perfect” trilogy, looks to give a fresh spin on the teen sex comedy genre with “Blockers”, where three young women, Julie (Kathryn Newton), Sam (Gideon Adlon), and Kalya (Geraldine Viswanathan), make a pact to lose their virginity on prom night.

Their plan- however- hits a road bump whenever Julie’s mom, Lisa (Leslie Mann), discovers a group message by the three girls detailing their pact. Appalled, she enlists the help of Sam and Kayla’s dads, Hunter (Ike Barinholtz) and Mitchell (John Cena) to “block” their daughters from having sex by any means necessary.

As made clear by that synopsis, there’s two parallel stories going on here, and that’s to the film’s detriment. Both stories work fine on their own, and could’ve made for some really great standalone comedies.

Newton, Adlon, and Viswanathan knock it out of the park, especially considering their relative newcomer status. Seeing sex discussed so frankly and honestly by female character in film is rare, and the film deals with their story honestly. There’s even a plot-line involving Sam struggling with her sexuality that comes off as very sweet and true-to-life.

These ladies are strong in comedic chops too. As the most crass of the three, Viswanathan’s Kayla gets a lot of laughs with her one-liners.

Mann, Barinholtz, and Cena’s storyline gets even more laughs. Their story might be a bit over-the-top, but that’s kind of the point, and the trio is game for whatever comes their way. Mann and Cena succeed in breathing life into the “worried parent” stereotype, with Cena playing against his typical “tough guy” image to great effect.

A scene where Cena chugs beer out of an unspeakable orifice makes him one of the bravest actors working in Hollywood right now.

Ike Barinholtz nearly walks away with the movie as a broken, “cool dad” type. One of the best scenes is whenever he tearfully admits to his fractured relationship with his family. This moment is really powerful, and then it’s undercut by a joke, which I think really is indicative of the greater problem with the film: there’s no tonal bassline to follow.

“Blockers” has no idea what it really wants to be. One minute it’s a raunch-fest, the other it’s a coming-of-age story, the next it’s a film about sexuality. There’s nothing wrong with exploring these themes, but there needs to be a neater way to tie them together.

Moreover, it all just feels so simple. Yes, there’s laughs, but none of them are anything we haven’t seen before in your run-of-the-mill studio comedy.

Whenever Kay Cannon spoke about the movie at the Q & A afterwards, it was clear this was a very personal movie for her, which is unfortunate because it feels like it doesn’t add up to very much. However, by the audience’s roars of laughter around me- and even coming from me at times- it’s clear this movie succeeds in its main mission to make people laugh.

“Blockers” may not live up to the sum of its parts, but if you’re looking for a decent studio comedy to throw on on Netflix one night, this isn’t the worst option.