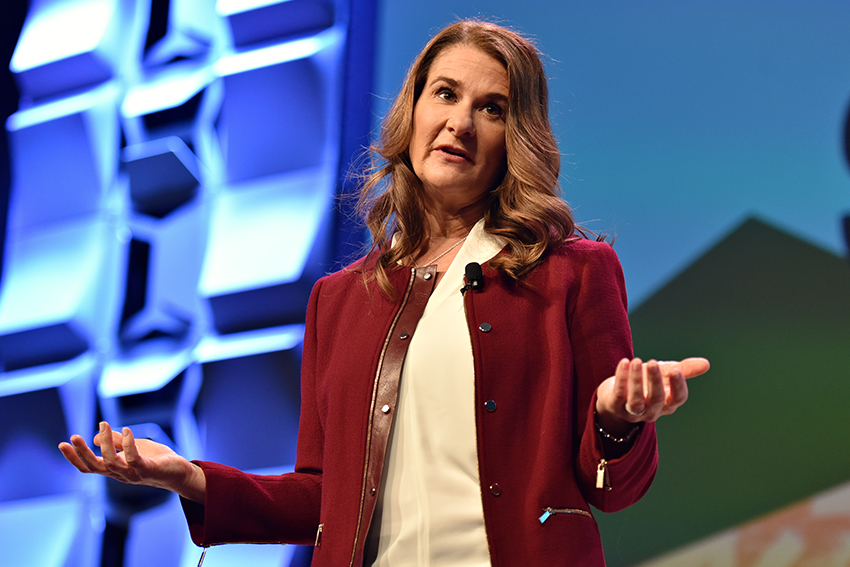 Starting off with a lecture and later transitioning into a panel of female business leaders, Melinda Gates delivered South by Southwest’s interactive keynote to a focused audience.

Gates started by giving her background and history of employment, recounting a personal internal conflict she faced after graduating from business school and joining Microsoft. During her orientation, one of her peers went out of his way to fight a VP on something they said. Gates felt like the comments were unnecessary, but quickly learned that this was common in the company, and in fact made people take note of you.

Gates said moments such as these are just small examples of how American workplaces need to make strides in creating more welcoming environments that don’t force employees change their lifestyles and personalities.

“(The current business environment) doesn’t invest in the mentorship and support that would welcome every person in,” Gates said. “It makes people make choices about personal and family life that they wouldn’t otherwise. The status quo is unsustainable… it’s holding all of us back. That’s why I want to have this conversation at South by Southwest. You have a role, you can decide this.”

Transition from a lecture format to a panel, Gates brought out Chief Content Office of Hearst Magazines Joanna Coles to lead the discussion. Gates continued to discuss the need for a radical redesign of how we work in The United States. She said business need to understand their workers, learning about everything from who they are, their talents, personal life and more.

Nina Shaw, founder of the Time’s Up movement, then joined the conversation, discussing how the movement gained momentum and why it’s still going strong. She referenced Mark Wahlberg donating $1.5 million to the organization, and when asked why such a pay discrepancy could happen, Shaw had a simple explanation.

“Men often get paid more because they drive the narrative,” Shaw said. “Which is because the stories are picked by men.”

TaskRabbit CEO Stacy Brown-Philpot then brought her more tech-focused perspective to the panel, and openly discussed with Gates the issue of venture capital funding, 2% of which goes to startups founded by women. Referring to men in the industry, Gates said it’s likely these people will look back and kick themselves for lost opportunities.

“They don’t see the markets women might see, or the markets someone of color might,” Gates said. “10 years from now, these guys are going to realize all of the deals they left on the table. We’re going to look back and think it’s crazy more money wasn’t flowing in that direction.”

When asked how men can help perpetuate these conversations, the panelists agreed it’s simple. They said men shouldn’t shy away and be afraid of movements such as Time’s Up, they should instead help junior people, include them in lunches and meetings and mentor women.

Wrapping up the conversation, Shaw took aim at those who felt like organizations such as hers were overstepping their bounds or creating an issue out of something that wasn’t a big deal.

“I think a bunch of guys are waiting for this to be over,” Shaw said. “It’s never going to be over.”