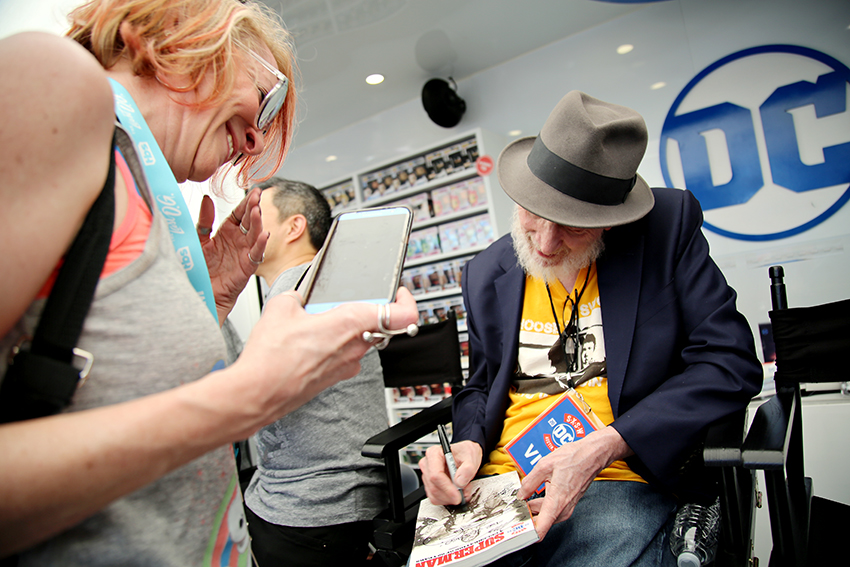 It’s bizarre to think that DC Comics have never done a pop-up shop at SXSW before, because they knocked it out of the park on their first go.

The shop- located at the corner of 8th and Red River- is a shrine to all things DC. Three different Batmobiles, the Superman monument from “Batman v. Superman: Dawn of Justice ”, and full statues of Wonder Woman and Aquaman are a few examples of the memoribilia that adorned the place, not to mention the wealth of items you could actually purchase there.

All of this is eclipsed by the special event the press was invited to on Saturday morning: a panel, entitled “Superman: 80 Years of Truth, Justice, & Hope”, to commemorate the release of the 1000th issue of Action Comics. The panel featured comics writers Dan Jurgens, Frank Miller, and Brian Michael Bendis, artist Jim Lee, executive producer of the new show “Krypton” Cameron Welsh, and “Krypton” writers Lina Patel and Nadria Tucker.

For anyone who follows the character of Superman, this was truly a dream team, and their insights did not disappoint.

First up was Jurgens, a Superman mainstay for decades best known for writing the record-breaking “The Death of Superman”. He talked, with a hint of emotion, about ending his run with Action Comics #1000 with his story “For The City Who Has Everything”, where he asks “What does Superman mean to Metroplis?”. Jurgens affirmed that this issue was the perfect place to make his final statement on the character and pass the baton to Brian Michael Bendis, for whose city Superman has a huge personal significance.

"In Cleveland, you grow up and you’re told Rock N Roll and Superman are born here, and that’s all you have…and some decent pizza”, Bendis said, referring to the fact that Superman was created in his hometown. All jokes aside, he seemed overjoyed to be taking on the character. His pull to Superman, in his own words, is “writing a character who exudes hope to everyone around him, and the burden that is”.

Furthermore, Bendis riffed on the pleasure of working with Jim Lee on their new Action Comics run that starts in #1000, saying he “wrote as big as I possible could, got to make it big for Jim”. This earned a laugh from Lee himself, who touched on his favorite stories from the character.

“In terms of art, Superman vs. Muhammad Ali… that to me showed the full range of that character, walking the streets of metropolis amongst the people”, Lee started, before giving one of the more interesting answers of the panel when talking about his favorite in terms of writing, “The Dark Knight Returns….[before that] Batman and Superman were interchangeable to me”, bringing up that they would dress up as each from time to time in the early history of the comics.

Frank Miller beamed at the mention of his work, while also giving the very best insights into the character of Superman. “The more I think about Superman, the more I love what you get. Superman- he’s a world to explore, and what I love about him is his purity, that in every sense he’s an absolute hero”. Even a creator known for his darker works, notably “Sin City” and the aforementioned “The Dark Knight Returns”, can’t deny the impact of the character.

The crew from “Krypton” gave some entertaining remarks, but nothing as notable as the other panelists. I still find myself going back to Miller’s quote, “Superman is a diamond, you can smash him against the wall or floor, and he doesn’t break”.

DC Comics, like Miller, really understand the value of not just Superman, but all of their characters. This may have been the first of their installations at SXSW, but if they keep up this quality, I’m sure they won’t break.