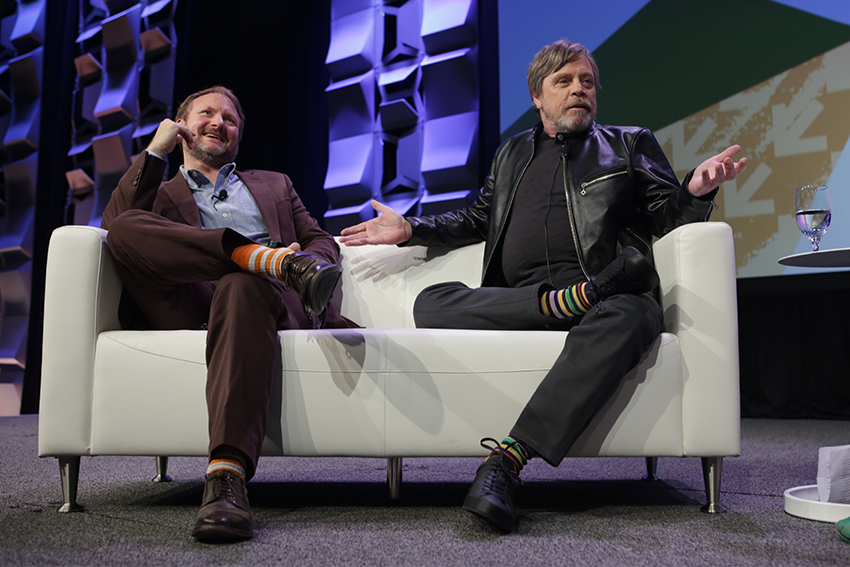 In a career-encompassing panel hosted by Vanity Fair writer Joanna Robinson, Rian Johnson discussed his entire career leading up to the release of Star Wars VIII: The Last Jedi and what’s going to come next.

Kicking off the panel with a bit of background, Johnson took pictures of the audience and warned of the coming hour.

“We wanted to talk about your life up to Star Wars,” Robinson said.

“So strap in mofos,” Johnson said.

Johnson recalled growing up watching Star Wars and Indiana Jones, filming with his parents’ camcorder and playing his movies on his family’s VCR. Johnson said he needed the help of his family to fund his first movie “Brick,” and that you can simply not stop at anything to try to make what you want.

“Be brazen,” Johnson said. “That’s something… I wrote ‘Brick,’ the first movie when I was out of college, and I basically spent my 20s trying to get it made. So it was an eight year process of trying to get money for it and trying to get the movie made.”

Giving advice for young filmmakers on the creative process, Johnson emphasized the importance of not focusing on getting an agent or trying to plan for some potential fame, but developing your talents and standing out from the field.

“I really believe, on a practical level that it’s actually true, that that’s putting the carpet before the horse,” Johnson said. “I do genuinely believe that the vibranium in the movie industry is someone who makes cool stuff that no one has seen before. And if you can develop your talent enough so you can do that, then you definitely have something.”

Getting deeper into the Johnson’s film “Looper,” Robinson read quotes from other directors on the film’s intrigue and quality. Johnson said he had the idea for “Looper” before he made “Brick,” and that he had been spending too much time thinking about money. In reaction, Johnson wrote “Looper” as a short, and it was eventually made into a feature-length film.

Jumping directly into Johnson’s three episodes directed for “Breaking Bad,” Robinson related Johnson’s experience in films to television production. Johnson agreed, remarking that TV has its challenges but it’s a bit different because the show wasn’t originally his idea.

“The big difference is I didn't’ write it,” Johnson said. “So for me, it was about coming in and serving the material. What is applicable about it, I guess, that Bryan Cranston and Anna Gunn, who had been playing their characters for seasons now, would know what to do. But that wasn’t the case, if they writers were doing their job, these characters were pushed in a new direction every week.”

Robinson disregarded her question cards, leaping into Star Wars. Bringing up the eighth film’s controversy, Johnson said the evolution of Luke Skywalker was to make something more of the character than just a regular hero. He related Luke’s journey to that of Beowulf, stating that myths aren’t made to sell action figures but to teach us something about ourselves.

“If you wanted to take Luke Skywalker seriously, at least, he has more depth than just that action figure on the wall,” Johnson said. “I had to get into why it felt right for me, get into the story and the conversation.”

Asked about whether or not he enjoys the restrictions of low-budget films, Johnson said that although it forces creativity, he doesn’t miss not having a lot of money to imagine his dreams. He commented that at the end of the day, the movie doesn’t live or die by cost, but rather the story and creating something special.

After a bit more discussion, Mark Hamill made a surprise appearance to discuss Star Wars a bit further. Hamill remarked that the documentary being released called “The Director and The Jedi” honors the people behind the scenes that work so hard to make Star Wars special. As Johnson took a photo of the moment, Hamill wrapped up the end of the panel, stating that the conversation he had with Johnson about Luke Skywalker’s future as a character.

“I’m sort of old school, stuck in the George Lucas era, and now all of the kids are doing the heavy lifting,” Hamill said. “It has to grow. Reunions are inherently disappointing. But, you know, despite the fact that my first reaction was asking if we could push it off until nine, in a way I can take cues from Luke. He eventually does the right thing for the Alliance, and Mark should do the better thing for the movie… I’m so lucky, I had a fantastic entrance in seven, and a fantastic exit in eight.”