Q&A: Sitting down with Summer Salt 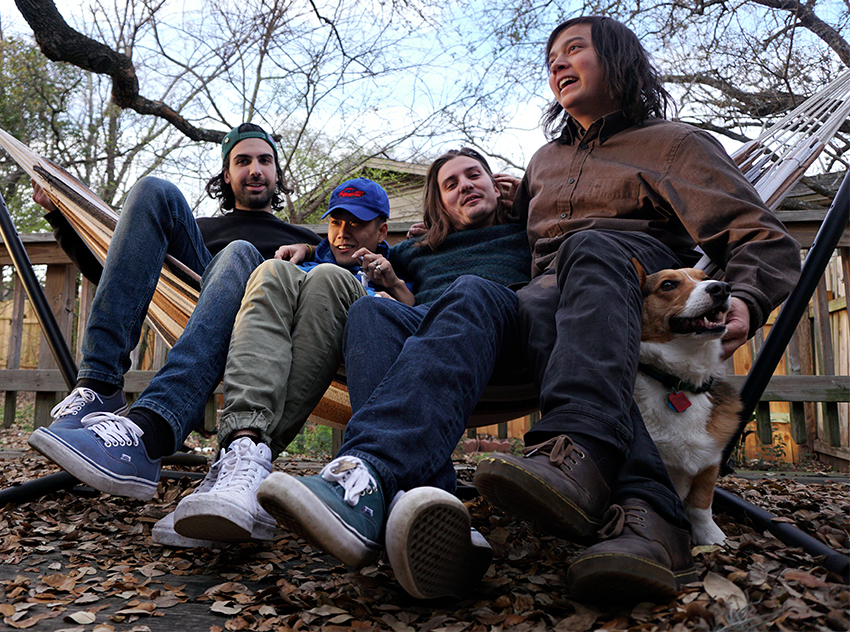 The former trio now quartet, Summer Salt sat down with the Daily Texan to talk about touring, their upcoming album and new member, MJ Tirabassi of the Walters. Within the past year, Phil Baier, Matt Terry, Eugene Chung have been touring and working on their new album Happy Camper, which they hope to have out later this year.

The Daily Texan: How have you been doing? As a band, individually?

Matt Terry: We’ve been pretty solid. Getting stoked to travel and do all those things What have you been doing the past year?

MT:  Well we started off by going to El Paso taking some photos for hours so polite EP that and then we started getting ready for tool in April with the Walters. The past three months we’ve been to the home just relaxing getting ready for big travels. Met some good people including the dude next to me (MJ)

DT: So that's when you all met MJ?

MJ Tirabassi: That was the third time we met, right?

EC: Yea because we met y'all at SX the year before that. And we went to chicago on a different tour in november 2016.

Phil Baier: But yeah basically been Recording into room preparing for more recording toy making art and hanging out

MT: The majority of the year with recording, getting ready for new releases stuff like that

MJ: And then we got to record mixed by one of our idols Bill Eck. He’s a good guy computer.

DT: When you say the record you mean…?

MT: Happy Camper. Were still in the air about how we want to go about releasing it, we have some lake offers and stuff  but its still up in the air.

DT: Do you have a specific time you think we can see the album?

MT: No, I know we said last year around spring but you know, it'll probably be even longer than we expect unfortunately. But we'll probably release the holiday EP on vinyl. Maybe.

DT: So MJ, when did you join the band. How has that I think it was one of the first things I said to you guys changed the band if at all?

MJ: Well i don't know how it changed the band because I wasn't her before but yea we went on tour with them and my band was kind of like slowing down and we were like maybe we should stop making music, so I was like, “Hey Summer Salt!

PB: Well we’ve been playing for a while. MJ was actually the one that reached out to us from the walters account. And we've always liked his voice and we knew it fit perfectly with us.

MT: Yeah it's funny because the first time i heard MJ’s voice even before I met him was like “ he sounds just like brian Wilson that's so cool” so it's kind if like this romanticized idea. We love harmony and we love vocal layers in our songs and it just seemed like a good fit.

PB: Yea I remember that.

MT: Definitely on tour there was some nice drunk romantic moments of us saying that we got to play together.

DT: How is adding MJ going to change the sound?

MT: It will just be fuller. I mean on ur records we dont ever just have one guitar or one vcal. So it's fun to do live and we feel like we can't really bring the energy as a three piece, but as a four piece we can be more precise to our sound.

EC: Yea true to the recording.

DT: So we mentioned Happy Camper a little bit. What else can you tell me about the album?

PB: Within the past year we have been just home recording it ourselves. We don’t know, but we all had full-time jobs so it kind of slow down the process. It’s kind of hard to do when we all have different schedules. But then we got everything compiled, 12 songs. Which turns out is twice as hard as six songs. But you know it took us a while then we were deciding how we wanted to go about it, so we decided to go professionally mixing it and we’re pretty happy with it

MT: Yeah I think there’s opportunities that have come about that have had kind of prolonged the process which is a good thing. We’re just so excited to put it out but at the same time just knowing that this isn’t the time like you know. Our original idea was to put out sooner but I think that we are making good decisions about it.

DT: What are yalls plans for SXSW?

PB: Well we actually didn’t want to wear ourselves out the south by so we only have two shows but I mean usually we got offered a shit load of shit and we kind of said no.

EC: Well we’re also going on almost a two month tour pretty much the week after south by

MT: But yeah I mean we haven’t even spent time practicing with MJ and I just got done with my fourth time job and so the time that we have before we leave for tour is not enough time. If we did a bunch of shows during south by it would be a lot and with also doing all the prep for that.

DT: So do you have any shows that aren't offical SX shows?

PB: Yeah there’s one at Love Goat by UT for the bike you gain booking showcase.qa

MT: Yea that one will be great. we play at 6 at Love Goat on friday.

DT: What are yalls goals for this year as a band?

PB: Just to be able to get the support that we need to sustain. Get exposure. Be inspired to write more new music

MT: Yeah see how it translates with MJ being here, writing new music and hopefully seeing where his new album goes.

EC: Yea I just want to put up the new album and see what happens.