Atkins, McCarty look to extend their careers against Maine 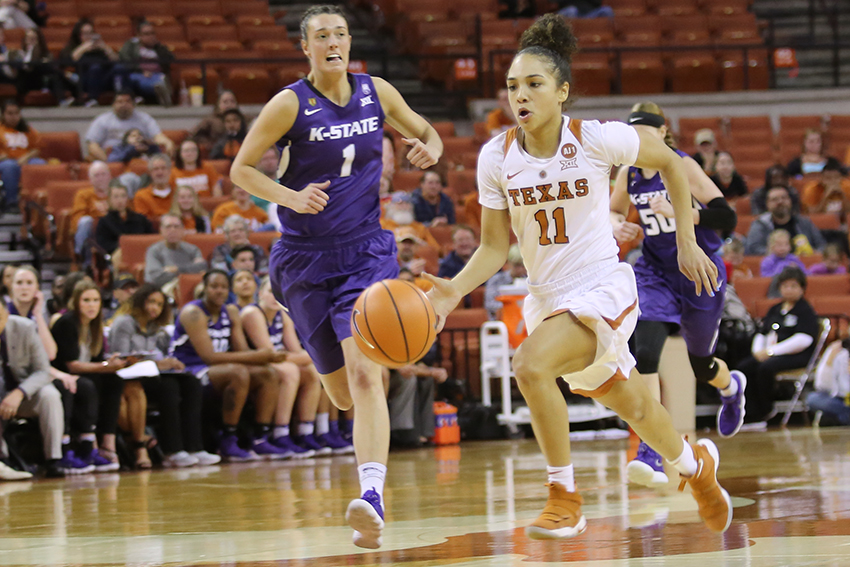 Ariel Atkins has become Texas’ level-headed, battle-tested leader over her four years with the team. But on Friday, for the first time in a long time, she was anxious.

The Longhorns had just wrapped up their usual practice routine at the Frank Erwin Center, running the fast break, knocking down threes and working on post moves.

This practice was different, though. It marked the final session before the second-seeded Longhorns’ Saturday matchup against fifteen-seeded Maine in the first round of the NCAA Tournament.

“I guess you could say it's not nerve-wracking, but it is butterflies,” Atkins said. “This is my last time, my last chance to be a part of this program. Just can’t say enough about it.”

Atkins first stepped foot on the 40 Acres in the summer of 2014, joining a Longhorns team that had just suffered yet another early exit in the NCAA Tournament the previous season. The Duncanville, Texas, native made an immediate impact, making 19 starts and helping Texas to its first Sweet 16 appearance in a decade.

Fast forward 1,367 points and 106 wins later, and the senior gunslinger is now on her last ride, determined to extend it.

“It’s one of those things where you don’t want it to end,” Atkins said. “I love this team and everything about this program. I’m just thankful to be here and excited to keep it going.”

Texas’ tournament run starts with an opening-round matchup against a Maine team that’s carrying a six-game win streak into the postseason. The Black Bears are led by a backcourt duo of sophomore Blanca Millan and junior Tanesha Sutton, who combined for an average of 29.8 points per game during the regular season.

“They can shoot the three really well,” head coach Karen Aston said. “But they can score in a lot of different ways, so we’re going to have to be really good on defense.”

Atkins will have plenty of backcourt help herself, though, as fellow senior guard Brooke McCarty will also look to extend her collegiate career. The dynamic duo has been the driving force to Texas’ success over the past four years, leading the Longhorns all the way to the Elite Eight in 2016.

“I don’t think it’s necessarily hit me yet,” McCarty said. “It’s crazy to think this is our last go around. I'm just taking it day by day, having fun with it and enjoying these last moments.”

Texas will look to lean on Atkins and McCarty once more come Saturday as the Longhorns deal with a depleted frontcourt. Senior forward Audrey-Ann Caron-Goudreau has been out since Feb. 10 with a bruised left wrist, and freshman forward Rellah Boothe was declared unavailable for the postseason on Thursday due to an undisclosed personal reason.

“I think (Caron-Goudreau and Boothe) definitely are important to our team,” McCarty said. “But we have the people who we have, so we need to play, go to the next day, and keep rolling.”

Texas will have plenty of support in the stands, though, as the Longhorns will host the match in front of their fans at the Frank Erwin Center at 5 p.m. on Saturday – something Atkins has come to appreciate over the years

“It'll definitely be exciting to see them screaming and hollering and going crazy for us,” Atkins said. “They’ve always shown support, so it means a lot to be able to play in front of them again.”

Although Saturday’s matchup could be Atkins and McCarty’s last time in burnt orange, the senior duo remains focused; determined to earn the Final Four appearance that’s eluded them thus far.

Until then, it’s business as usual.

“I think (McCarty and I) came here and have given Texas everything we have,” Atkins said. “But we still have more to go. At this point it's just fighting for the next day.”