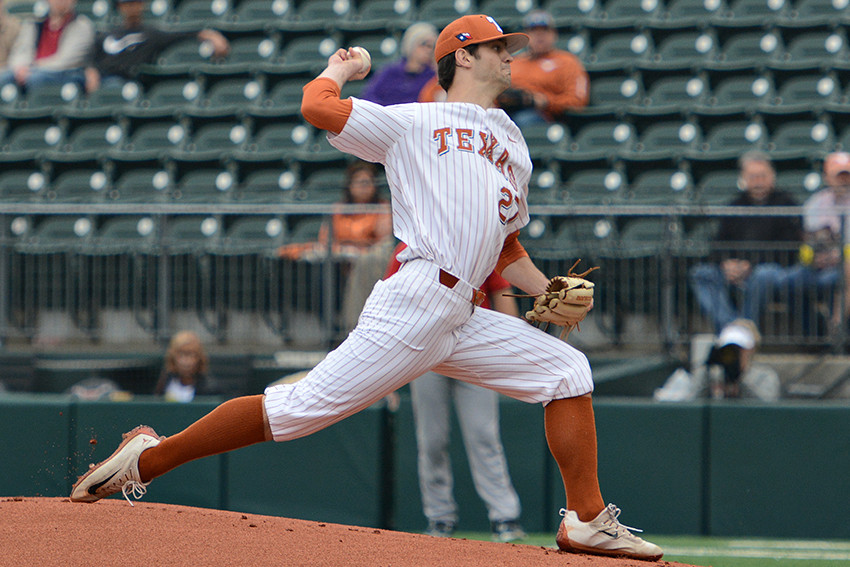 Texas seems to have found its stride entering conference play. After a five-game losing streak to end the nonconference season, the Longhorns are back on track.

Texas (11–9) took the opening game of the series against Kansas on Friday, and the Longhorns won again on Saturday, this time by a score of 4-0.

The story of the game was sophomore starting pitcher Blair Henley, who threw seven complete innings, allowing just five hits and zero runs. Henley came into the day with a 2–1 record in four appearances and sported a 2.35 ERA. Saturday’s numbers will further his impressive statistics for the year.

One of Henley’s more impressive traits relative to his fellow Texas pitchers is his command of the fastball. His ability to place the ball down in the zone this year has helped him out immensely, especially against an early-season schedule that was loaded with fastball hitters.

Texas head coach David Pierce even went as far as to say that Henley’s fastball command was “outstanding.”

“We just did our job all around (today),” Henley said. “(I) commanded the fastball again, like I try to do every week. Then I mixed my other two, three pitches in when I had to. Other than that, all we had to do is go out there and compete like we do every time.”

Another revelation from the pitching staff Saturday was the long-awaited return of a solid pitching performance from junior closer Beau Ridgeway.

Ridgeway, who has struggled on the mound recently no matter the situation, finally showed Texas fans a glimpse of the dominant reliever he had proven himself to be over the last two years.

Ridgeway came into a tough situation with zero outs in the eighth inning, with men on first and second base. His performance was nothing short of fantastic, as he made quick work of the eighth and was lights-out in the ninth. In total, Ridgeway threw for two complete innings and allowed zero runs and only one hit.

“For him to come in and get the job done was as big for him as it was for the team,” Pierce said. “Just another confidence booster. When I went to the mound, I started saying and rattling a bunch of stuff to him, then I finally just looked at him and said, ‘Believe in yourself and compete.’ And that’s what he did.”

Offensively, Texas had an average day at the plate. The team only scored four runs on seven hits and surprisingly struggled to put good swings on the ball. The Longhorns were able to do more than enough, however, as the four runs comfortably gave Texas the win.

Junior infielder Kody Clemens, though, continued to play out of his mind. He went 2-4 at the plate and had two RBIs. His shining moment of the game was his solo home run in the bottom of the first inning. Clemens showed that he has plenty of power, as he made it a team-leading five home runs on the season.

Texas will play its final game of the Kansas series on Sunday, looking for a sweep. First pitch is scheduled for 1 p.m.