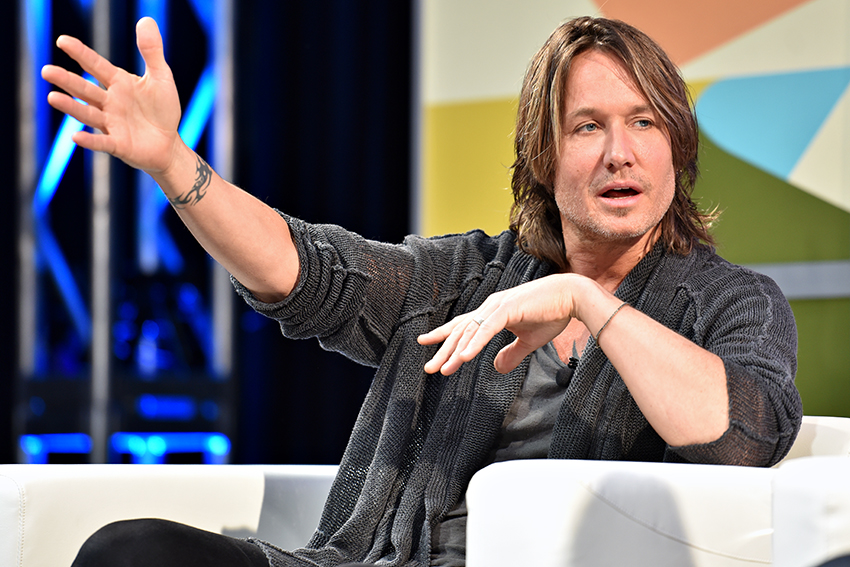 Hosted by Scott Goldman, Vice President of the GRAMMY Museum, SXSW kicked off day 8 with a discussion with country music legend Keith Urban.

Urban started with his childhood, telling the audience how he received a ukulele at the age of 4 and picked up a guitar at 6. Urban’s father was a drummer in the 50s, and when rock went several ways in the 60s, Urban said his father opted to move in the folk direction and eventually country. Urban first concert was Johnny Cash, and he said that the show with an attendance of 5,000 hasn’t left him.

“It never left me, that power,” Urban said. “When he strummed the guitar and sang, it was amazing.”

Urban said he grew up playing country music, but he immersed himself in top 40 music via the radio. After seeing John Mellencamp live, Urban realized that he didn’t need to restrict himself to just one genre — he realized it’s about pursuing what you love.

After trying to write original music while in a cover band but being rejected by the lead singer, Urban left the group and moved onto his own band. After ending up in Nashville, Urban said that the city’s for-hire collaboration culture wasn’t for him.

“It’s really hard at first. It’s a weird phenomenon,” Urban said. “Walking into a room, a couple of yellow legal pads and a guitar, and trying to write a song. It was so unnatural for me.”

Urban said Nashville was an immense learning experience for him, requiring him to step out of his comfort zone and strengthen his craft. However, Urban was hesitant to accept advice from just anyone. He said initially, his band was forced to play in strange places. Once, he played a party for an Australian airline in exchange for free tickets in an airport terminal on top of a baggage carousel which started up unexpectedly in the middle of the performance.

Discussing the recording of his first solo album, Urban said he struggled in a studio environment as someone who cut their teeth on live performances. Relating the process of recording a record to maintaining balance, Urban struggled the most with hearing his own songs for what a song isn’t rather than is, listening to songs afterward and paying attention to the elements he didn’t personally conceive. At the same time, Urban admitted he is a bit of a perfectionist.

Telling the audience he’s constantly listening to new music, Urban said people are usually surprised when they hear he hasn’t lost inspiration. Urban said it doesn’t make sense to him when people say he has no struggles to draw from due to fame and wealth when he’s lived a full life and has “more than enough to draw from.”

Questioning Urban’s potential to get locked in one place, Goldman asked Urban how he’s still passionate today. Urban said that he sees everything as valid, and with a large and dedicated audience he enjoys the process of making and premiering music to people.

Wrapping up with some words of advice on creating in today’s world, Urban said that the cerebral nature of creation is daunting to many but that the people who are willing to march on will succeed.

“Self-awareness is a very dangerous thing,” Urban said. “Ultimately, we’re creating while critiquing. Let’s just do it, and not think about it too much… In an attempt, there might be a small thread that’s interesting I would have never discovered if I hadn’t dared to suck.”