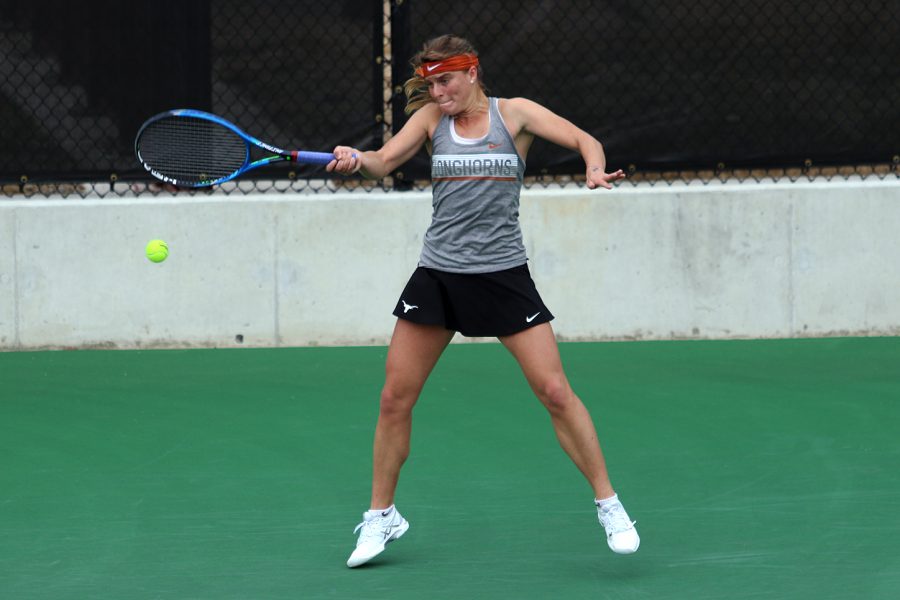 No. 12 Texas pushed its winning streak to six matches in a row after defeating Big 12 opponents Kansas and Kansas State this weekend.

The Longhorns started their successful road trip with a 4-2 win over No. 17 Kansas on Friday evening. The Jayhawks opened the match up by winning the doubles point to take a 1-0 lead over Texas. The loss ended a streak of wins in the doubles point for the Longhorns, who made changes at the spot after struggling earlier in the season.

Texas rallied to beat Kansas after collecting four strong wins in the singles session that sealed the match victory.

The highlight of the match was No. 1-ranked Bianca Turati defeating Kansas’ Anastasia Rychagova — a former No. 1 and now the No. 3-ranked player.

“Kansas is a feisty and tough team, and we definitely will draw some confidence from the win,” Texas head coach Howard Joffe said. “Everyone chipped in, but Bianca’s emphatic win over the No. 3 player in the nation was excellent.”

Texas continued play Sunday in Manhattan, where the Longhorns defeated No. 40 Kansas State. The match started with a doubles-point win for the Longhorns. That led into an incredibly competitive singles session in which the Longhorns started every match with a first-set loss.

Texas rallied in each of those matches and avoided a single loss on the day.

“After losing all six first sets, it looked a little bleak for a while, but this is a prideful and tough group of young ladies,” Joffe said. “They were able to pick themselves up and turn the match around.”