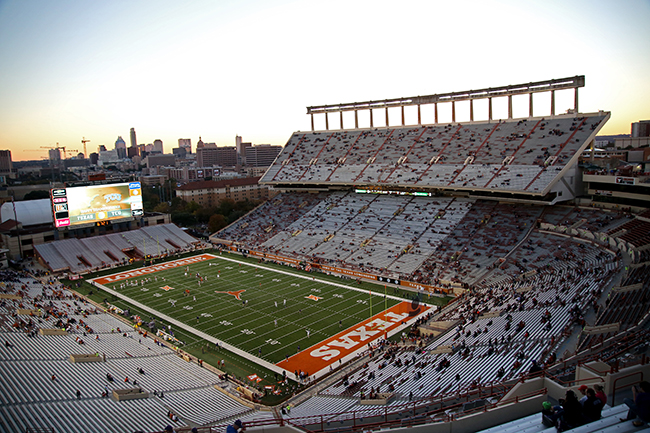 Colt McCoy enjoyed a peculiar homecoming yesterday afternoon. From 2006–2009, the legendary former Longhorn quarterback accounted for more scoring tosses in Darrell K Royal-Texas Memorial Stadium than any other player in school history. But on Wednesday, he came out onto the field toting a golf bag instead of a pigskin, perhaps to the dismay of many Texas fans.

Accompanying him was professional golfer Jhonattan Vegas. A Longhorn alumnus himself, Vegas is a three-time PGA Tour winner and is taking part in this weekend’s World Golf Championships-Dell Technologies Match Play, hosted at Austin Country Club.

To commemorate the return to his old college stomping grounds, Vegas sparred with McCoy in an informal game of trick golf on the hallowed gridiron:

"Let's see if we can beat Colt in his field." @JhonattanVegas and @ColtMcCoy play some trick shots at the @TexasFootball field! #HookEm pic.twitter.com/oEomV59F1s

Unsurprisingly, Vegas appeared to have bested McCoy in the opening round of festivities, which involved a duel over who could knock a golf ball into a trash bin from 50 yards away. Once that was settled, the ex-Longhorns switched gears, with McCoy attempting to catch one of Vegas’s shots on the fly in a remote-controlled toy car.

Check out the action in the video above.