Atkins’ heroics come up short as Texas falls to UCLA, 84-75 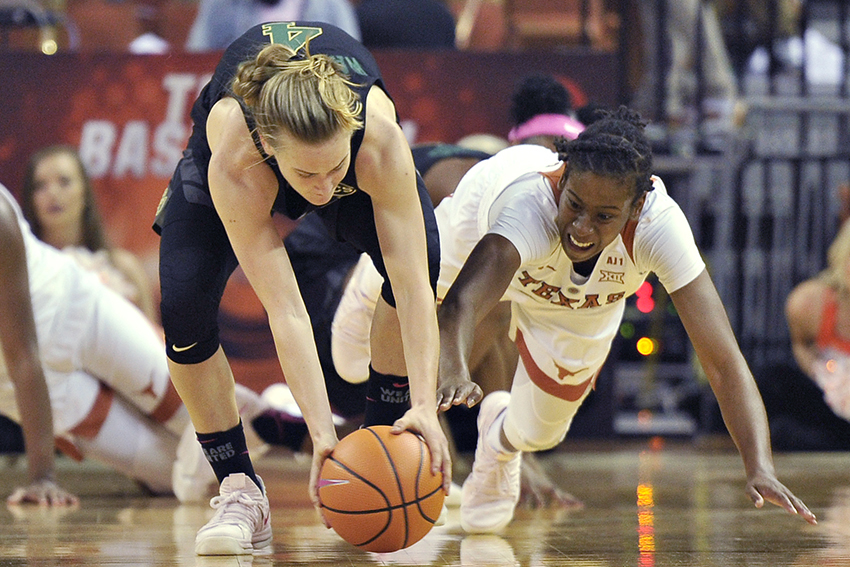 KANSAS CITY, Missouri — Ariel Atkins gave her all to the Longhorns’ program, even down to the last second.

The senior guard walked off the court of the Sprint Center after Friday’s season-ending loss to 3-seeded UCLA in the NCAA Tournament, knowing it was the last time she’d don the burnt orange and white she’d worn with such pride over the past four years.

The journey concluded as Texas fell, 84-75, in a game that was an uphill battle the whole way through.

The Bruins outplayed the Longhorns from the opening tip, employing a full-court press that forced seven Texas turnovers in the first quarter. Even when they could break the press, the Longhorns couldn’t buy a basket as they shot an abysmal 5-for-16. UCLA capitalized on the sluggish start, claiming a 19-11 lead at the end of the first.

“We were a little uncharacteristic with the basketball,” Texas head coach Karen Aston said. “We just had inopportune turnovers, obviously way too many, (early on). You have to give UCLA a lot of credit.”

That lead ballooned to 11 for the Bruins in the second quarter with 3:28 remaining. Every attempt by Texas to chip away at the lead was answered by a UCLA run as the Bruins took a 39-31 advantage into the half.

Texas retreated to its locker room, just two quarters away from seeing its season come to an abrupt end. But Atkins held her head high as she prepared to come back out for the start of the second half.

She wasn’t going down without a fight.

Atkins set the tone in the third quarter, starting it off with a corner three that ignited the Longhorn bench. The senior guard then delivered on the defensive end, stealing the ball and dishing a no-look assist to junior forward Jatarie White on the fastbreak.

Texas rallied behind its senior leader, igniting a 14-3 run to claim a 45-42 lead with 6:50 remaining in the third — its first lead of the game.

“Our message at halftime was to stick to our game,” Atkins said. “We hadn’t played our type of basketball in the first half, but I feel like in the third quarter we found a flow.”

But UCLA held its composure, responding with a back-breaking 17-4 run to take a commanding 59-49 lead entering the final quarter of play.

Desperate to keep her season — and her career — alive, Atkins kept fighting.

The 5-foot-11 guard kicked off the final quarter by sinking a contested layup, trimming the lead to eight. She found her way into the paint once more on the following possession, snagging an offensive board and finishing from close range.

Once again the Bruins didn’t budge, extending the lead back to double digits thanks to UCLA’s Jordin Canada. The Longhorns had no answer for the senior guard as she torched Texas for 20 points in the second half.

“In the second half, (Canada) just decided to take over,” senior guard Brooke McCarty said. “When she gets going, it’s going to be a tough matchup. She really managed the game well.”

With just eight seconds remaining in the game, UCLA secured the final rebound and began to dribble the clock out. Atkins full-court pressed until the buzzer sounded.

Atkins totaled 11 points in the final quarter, finishing with a team-high 20 points to go along with seven rebounds in the loss.

The heartbreaking defeat marked the final chapter for a player who led the Longhorns to four straight Sweet 16 appearances, establishing a standard for the program for years to come.

“I’m extremely blessed to have had this opportunity,” Atkins said. “God opened up a lot of doors for me since I’ve been here. Now the stage is set for our younger players to take off. They know what they need to do.”