Justin Thomas stays hot at Dell Match Play, closes in on world No. 1 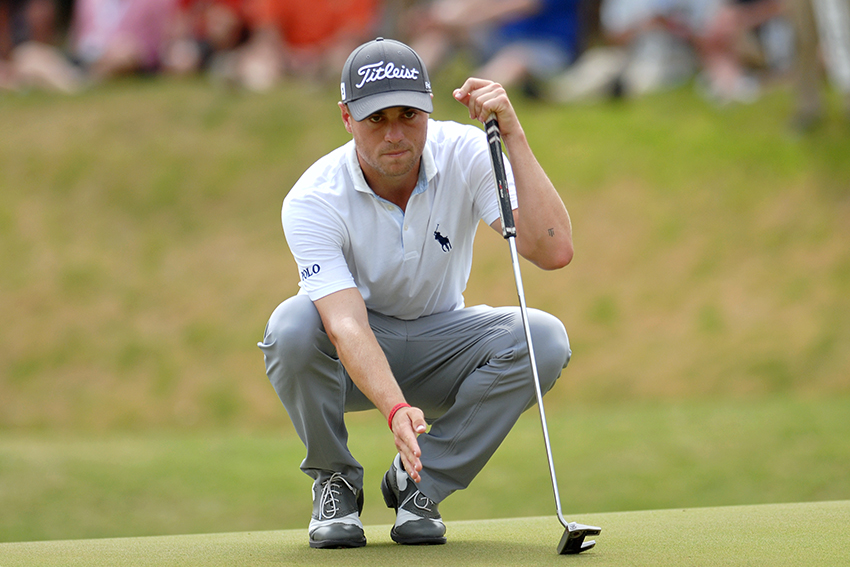 For a while on Monday, Justin Thomas didn’t even know he was going to play in this week’s World Golf Championships-Dell Technologies Match Play.

Thomas battled some sort of sickness early in the week — a doctor told him he had strep throat, but Thomas didn’t think that was the case. Regardless, he played nine holes in a practice round on Monday in front of a very small gallery — and it wasn’t pretty.

“I was 50/50 on Monday,” Thomas said. “There were probably 15 or so people that watched me play nine holes, and you find those 15 people and see if they thought I was ready to play in a golf tournament. Some of the shots I hit were pretty funny.”

But despite not feeling 100 percent early on, Thomas has been nothing short of stellar this week at Austin Country Club.

He won all three of his matches in group play. He dismantled South Korea’s Si Woo Kim, 6 and 5, during Saturday morning’s Round of 16. He then took care of fellow American Kyle Stanley in Saturday afternoon’s quarterfinals, winning 2 and 1 to advance to Sunday’s final four.

“(Thomas) always has his foot on the pedal,” NBC golf analyst Peter Jacobsen said. “He’s always going forward, and he’s the hottest player on the planet.”

Thomas already sits atop the FedEx Cup standings. If he advances to the championship match on Sunday afternoon, he’ll grab hold of the world No. 1 ranking.

“I don’t know what’s going to come with it,” Thomas said. “But I just hope it happens (Sunday).”

For much of his young professional career, Thomas was always considered one of those players lurking in the shadows — full of potential but just lacking the wins. He now has eight PGA Tour wins to his name, including two this season. But his big breakthrough came last August at Quail Hollow when he won the PGA Championship — his first-career major.

If the 24-year-old ascends to No. 1 in the world on Sunday, he’ll join Tiger Woods and Jordan Spieth as the only American players in history to have claimed the top ranking before the age of 25.

“My confidence level is just higher,” Thomas said. “I know that I have the game to play at the top.”

And if you’re looking for a Texas connection in what’s left of this year’s Dell Match Play, the closest one you’ll find is in Thomas. He just so happens to be good buddies with former Longhorn and three-time major winner Jordan Spieth. The two played junior golf together.

Thomas was also a member of the Alabama team that lost to Spieth and Texas in the finals of the 2012 NCAA Championship.

It’s always funny how spectators' allegiances change so quickly in golf, especially in a match play format. All three Longhorns in this year’s field — Spieth, Jhonattan Vegas and Dylan Frittelli — failed to make it out of group play.

So on Saturday, the gallery seemed to mostly back Thomas, or “JT” as the fans like to call him. The crowd could be a little more split come Sunday morning, though, when Thomas faces Bubba Watson in the semifinals.

Watson certainly needs no introduction in the golf world and has always been a fan favorite. The 39-year-old won the Masters twice (2012 and 2014) and just picked up his 10th-career PGA Tour victory at the Genesis Open in February.

“I’ve always thought he’s one of the most impressive players I’ve played with and watched go around a golf course,” Thomas said of Watson. “So I’m sure he’s sending it around here. Hopefully I won’t get too intimidated by it.”

And Watson has flare. He swings a pink driver, wears different-colored gloves, hits the ball a country mile and can make the ball move more than almost any Tour pro out there.

“You have to give (Thomas) the edge (Sunday), but this course is made for Bubba,” NBC golf analyst and two-time U.S. Open winner Johnny Miller said.