‘Game Over, Man!’ is another flick swept into Netflix’s trash heap 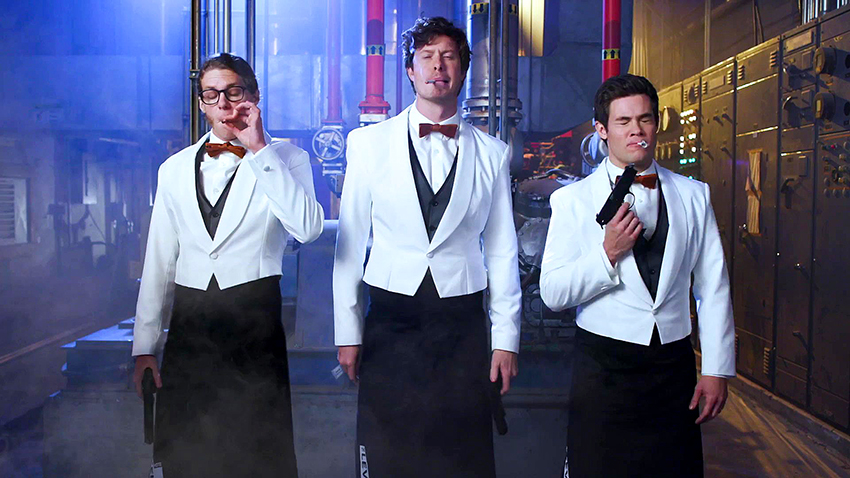 Instead of watching all 101 minutes of “Game Over, Man!,” just stick to the two-and-a-half-minute trailer.

From the creators of “Workaholics,” “Game Over, Man!” is an action comedy saturated with blood, gore and not enough humor — at least, humor that creatively reaches beyond cheap pop culture references, absolute buffoonery and obscene sexual humor.

Written by Anders Holm, “Game Over, Man!” centers around three friends — Alexxx (Adam Devine), Joel (Blake Anderson) and Darren (Anders Holm) — who desperately desire to escape from their current life as hopeless hotel housekeepers. The three stooges pitch a video game idea to a rich playboy tech investor and current hotel resident known as The Bey (Utkarsh Ambudkar). In a turn of events, their benefactor, along with the rest of the hotel, is taken hostage as part of a mad scheme to rob The Bey of millions. Alexxx, Joel and Darren have to fight through waves of kill-crazy henchmen to rescue The Bey to fulfill their dreams of living the lavish life they dreamt of since childhood.

Although this might sound like the perfect Saturday night laugh, the unpleasant surprise of how many penis jokes and sightings — especially Devine’s — can fit in an entire movie will turn most people off. Unremarkable quips are thrown out left and right instead of writing even just a single good joke.

Of the scenes that work, most center around Devine, who almost always steals the show as the ill-witted character who ruins everything while he thinks he’s making things better. Why his two bros chose him as the pack leader is a mystery, but it sure does open the door for a lot of pity laughter.

The overarching issue with “Game Over, Man!” is that it tries too hard. Every moment is glutted with hollow jokes, leaving no room for the film to breathe and flesh out a thorough story. Had Holm focused in and cut out a lot of the garbage, Netflix could have had something special. But Holm did not, and instead we are left with a movie that only “Workaholics” fans might enjoy — with a heavy emphasis on might.