In command of his game and life, Bubba Watson wins WGC-Dell Match Play 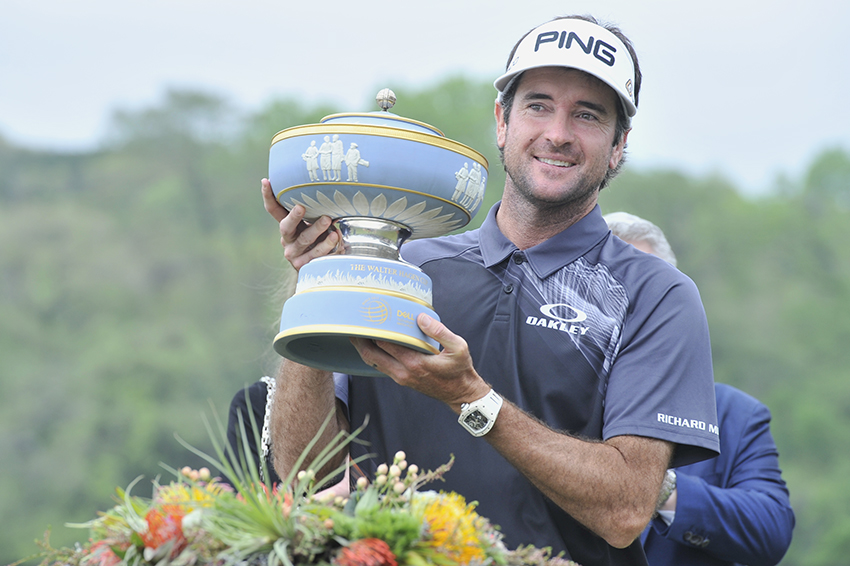 By the time he teed off Sunday morning for his semifinal match with Justin Thomas, Watson was supposed to be on a flight out of the country. He’s going on vacation with his family this week before heading to the Masters.

Watson had to change his plans, though, once he beat Kiradech Aphibarnrat in Saturday afternoon’s quarterfinals.

“I don’t mind calling the resort and telling them, ‘Hey, I’m going to be a little late,’” Watson joked Sunday evening. “Maybe they’ll give me a free cake when I get there or something.”

But there was Watson standing on Austin Country Club’s 12th green just before 5 p.m. Sunday, putting the finishing touches on his 7 and 6 rout of Kevin Kisner to win on an overcast day.

For Watson, it was his second victory on the PGA Tour this season and the 11th of his career.

His mother, Molly, came out to the green in between TV interviews to give Watson a hug, leaving him in tears.

“You’re really good at this game,” she told Watson.

Watson has long been a player known for wearing his emotions on his sleeve. At times in his career, they’ve gotten the best of him. Other times, he’s rode them to big wins.

Last year was one of the lowest points in his life, Watson admitted Sunday evening. He was ready to walk away from the game and contemplated retiring.

“But sitting at home, I was like, ‘Man, this sucks. I want to play golf,’” Watson said. “So I got off my couch and started playing golf. Quit eating chips and here we are.”

Watson isn’t afraid to speak candidly on personal matters like those. It’s what makes him one of the more compelling players in professional golf. Whether it’s his emotions, his unconventional swing mechanics, his ability to crush his pink driver or his knack for saying what’s on his mind, Watson captivates — and at times turns off — the audience.

“There’s two Bubbas,” NBC golf analyst and two-time U.S. Open winner Johnny Miller said. “There’s one that sometimes can get a little cocky out there and a little bit negative — complain about this or that…a course that doesn’t fit his eye. And then you’ve got good Bubba. And when good Bubba is around, watch out.”

Golf is a game in which you can’t afford to let your mind wander, but Watson said his mind constantly does so. He seemed amazed that he’d faced “four or five shots” all week where he felt uncommitted and unfocused.

For a moment, he seemed to let his mind wander as he walked off the fifth green Sunday morning during his semifinal match with Thomas.

As Watson approached the sixth tee box, he turned to a reporter and said, “Hey, no matter what — I was beating No. 1 at one point.”

Watson had just birdied to go 2 up on Thomas, who had an opportunity to claim the world’s No. 1 ranking had he defeated Watson. Even in that moment, whether he ended up winning or losing, Watson wasn’t afraid to let his mind realize what was going on.

During his championship match with Kisner on Sunday afternoon, Watson was in total control.

He won six of the first seven holes to take a 6-up advantage. He birdied the par-4 10th to go 7 up. He closed out Kisner shortly after at the par-5 12th.

As he concluded his championship press conference Sunday evening, Watson let out a little more honesty.

“Match play is not my favorite,” Watson said. “I love it today, though.”

Watson will head to Augusta National next weekend in preparation for what he called “the greatest sporting event I’ve ever been associated with” — the Masters. He’s won the tournament twice before in 2012 and 2014.

With two wins under his belt this season and renewed confidence in his game, Watson is on form at the right time and could have a chance to slip on a third green jacket.

Asked if he was a favorite to win, Watson pleaded with the media.

“No, I’m not a favorite. I’m going to definitely say that,” Watson said. “I don’t want anybody to talk to me that week. Let me just focus on what I’ve got to do.”

But with the way he’s played lately, Watson may have no choice.