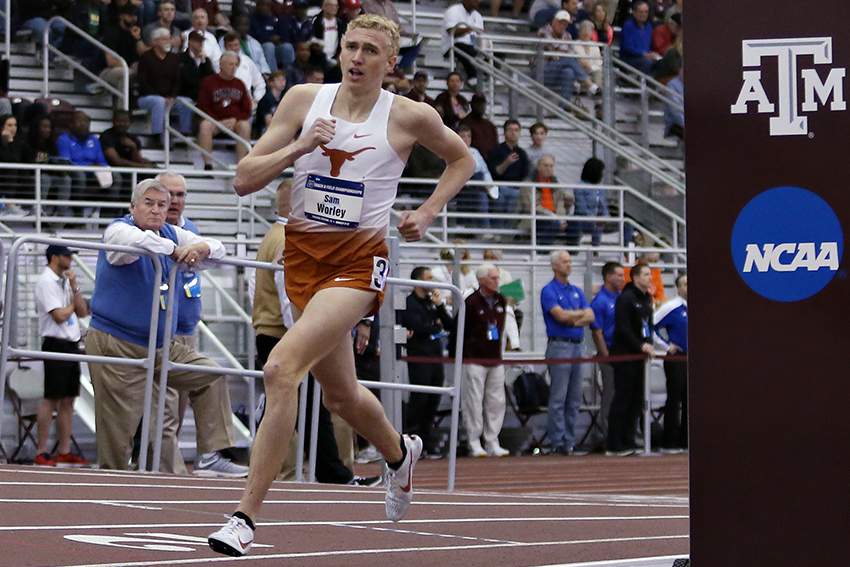 Sam Worley is no stranger to big expectations.

Coming in as one of the top first-year distance runners in the country, he knew the weight of what was expected of him in his first season at Texas.

But the freshman second-team All-American, described by teammates as “just different,” has lived up to the hype. His passion for the sport, combined with his talent, has developed him from an elite high school runner to a school record-setter in a matter of months.

The freshman runner put the country on notice in just his second collegiate mile, setting a school-record 3:58:0. He also qualified for the national championship meet, where he finished 15th.

A year ago, Worley had fully emerged as one of the top distance running prospects in the country, yet he struggled to make his college decision. Once he decided on Texas, he knew it was an excellent fit.

“Integrating myself with this team was super easy because once I was on campus, it was like I was with my family, and I just loved every minute of that,” Worley said. “(The team) is a huge reason why I’m here and loving what I’m doing.”

For a freshman student-athlete competing each weekend throughout the year, adjusting to college life can be overwhelming. But Worley has welcomed the challenge with open arms.

“Ultimately I have to take a step back and realize why I’m doing this,” Worley said. “It’s to pursue my passions and my goals. I wouldn’t trade that for the world.”

None have been more supportive of Worley’s decision than former high school and now college teammate Alex Rogers. The junior distance runner knew of Worley’s impact both on and off the track.

“It was like seeing my brother come to the same school,” Rogers said. “That was really exciting for me because I knew first off that it was going to be a great time, but then also that because of who he is, he was going to raise the program to a new standard.”

Despite being a freshman, Worley has led the Longhorns by example, becoming a fixture for Texas cross country and distance running coach Brad Herbster’s group.

“He just has high expectations like a lot of the guys do, but he backs it up with the type of person he is and his really high work ethic,” Herbster said. “He takes criticism well, he takes coaching well, he’s really set his mind on being the best he can be.”

It’s this work ethic that’s given Worley a commanding presence both on the track and in the locker room.

“His mindset has always been the same,” Rogers said. “He’s just gotten stronger and faster over the years, but he’s just been consistent in having that killer mentality. To see how he progressed this year, from high school winning Texas Relays as a high school senior to running and breaking the school record, we’re witnessing a once-in-a-lifetime talent.”

Although Worley has enjoyed a high level of success in his young collegiate career, the freshman runner still demands more from himself.

“Coming in I set some really high goals and standards for myself, and I didn’t quite follow through with a lot of those,” Worley said. “For me, I have to be patient. I haven’t performed quite to what I thought.”

Worley still has plenty to learn as he enters into his first collegiate outdoor season. But his ambition and motivation will continue to stand firm.

“The drive has always been that I believe I can be faster,” Worley said. “It’s always just trying to live not only up to my potential, but live past it, and really just see what the limit of what I can do is.”