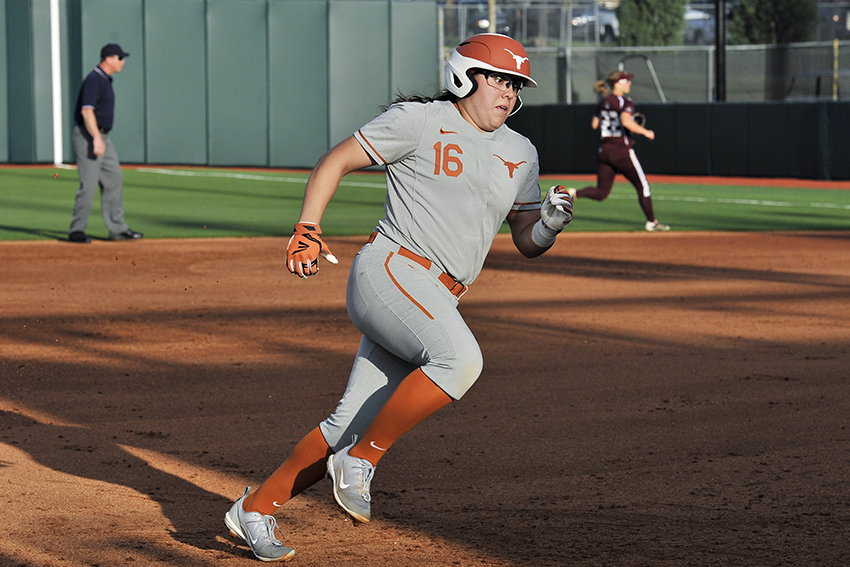 There’s a common adage in sports — the best defense is a good offense. The Longhorns have ridden heir offense during their four-game win streak.

Texas achieved its longest winning streak of the season Sunday against Kansas, completing a sweep in the opening series of Big 12 play. Texas looks to continue its hot streak against Stephen F. Austin on Tuesday night.

The Longhorns’ offense scored a total of 18 runs over the course of the Kansas series, a marked improvement in production from the non-conference schedule. For comparison, Texas scored 20 runs over the 10 games prior. The return to offensive success has done wonders for the Longhorns in terms of momentum.

“It boosts our confidence a lot,” junior captain Bekah Alcozer said. “It’s nice to just come out and do what we know how to do and hit the way we know how to hit.”

Texas’ offense has largely held the team back this season, but with a couple of tweaks, it has become the team’s most powerful tool lately against quality programs. A win over then-No. 25 Texas State and a 23-win Kansas team could not have been accomplished without hefty offensive contributions.

“We did tweak the lineup starting last Wednesday with the Texas State matchup and then kept it the same against Kansas,” Texas head coach Connie Clark said. “We had been chasing some stuff out of the zone recently, so we worked on pitch identification this week. I think what we did in practice has really paid off.”

While the offense appears to have finally turned the corner, the pitching staff has also continued to excel, led by aces senior Paige von Sprecken and junior Brooke Bolinger, the latter of which was named the Big 12 Pitcher of the Week for her performance against Kansas.

Bolinger posted a 2–0 record and a perfect 0.00 ERA and collected 10 strikeouts while allowing only four hits over 9.1 innings. She also limited the Jayhawks to a .138 batting average.

Additionally, redshirt junior pitcher Erica Wright has proven to be a reliable third option out of the bullpen this season.

The improved production on offense has finally begun to result in wins for the pitching staff, as the much-needed run support has finally manifested in games.

The Longhorns face SFA on Tuesday at 6 p.m. at McCombs Field.