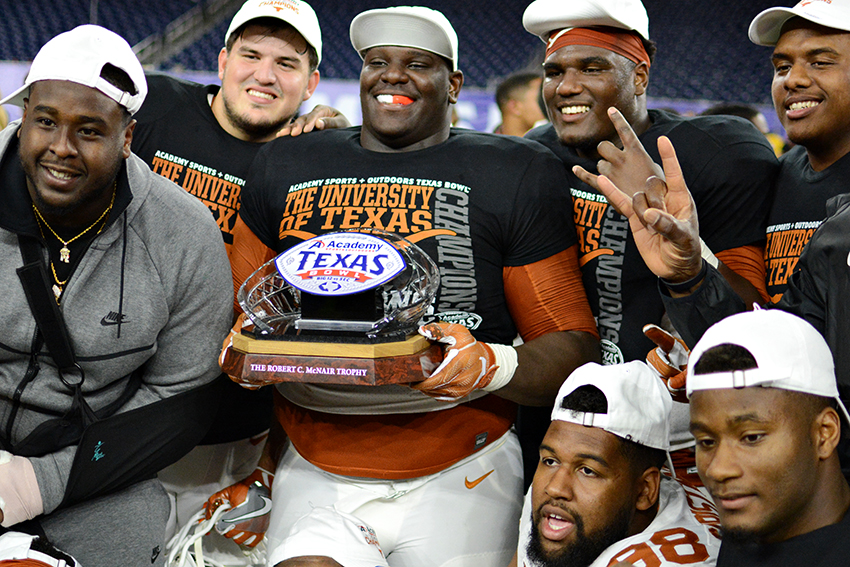 As the sun rises Wednesday morning, seven former Longhorns and a plethora of NFL scouts will pile into the bubble at Frank Denius Fields as Texas hosts its annual NFL pro day.

Michael Dickson, DeShon Elliott, Holton Hill, Malik Jefferson, Chris Warren III and Connor Williams all received invitations to participate in the NFL Scouting Combine, which took place last month, and will all work out in Wednesday’s pro day as well.

Players received invitations and participated in the 2018 NFL Scouting Combine in late February, but to the Longhorn faithful’s surprise, there was one name missing: Poona Ford. The standout defensive lineman was named Big 12 Conference Defensive Lineman of the Year, a first team All-Big 12 selection and was elected as a team captain for the 2017 season, but Ford was left off the list and did not work out at the NFL combine.

Texas head coach Tom Herman emphasized the importance of Ford throughout the entirety of the 2017 season, and his praise even carried over into the first day of spring football, which is why the omission caught much of the Longhorn nation off guard.

“That guy, as I told you numerous times last year, is probably one of the hardest practicing defensive lineman I’ve ever seen,” Herman said. “Obviously it showed on game day. He’s a Big 12 Defensive Lineman of the Year.”

Despite his absence at the NFL combine, Ford will still have the opportunity to display his skills in front of NFL scouts come Wednesday.

Players will run through weight room weigh-ins, the bench press, vertical jump and broad jump, as well as the 40-yard dash, 60-yard shuttle and position workouts.

Herman and his staff, meanwhile, are now looking to replace the holes these seven players left in their departure from the program. Current Longhorns, old and new, practiced in pads for the first time Saturday and returned to the field on a cloudy Tuesday afternoon.

Herman was visibly pleased with his team at this point last week. That wasn’t the case on Tuesday afternoon, however.

“Not a very good practice today,” Herman said. “We’ve got to do a better getting our guys up and motivated for each practice. We fumbled the ball way too many times today on offense. The defense, in the playing period, both had the ones and the twos drive 70 yards on their respective defenses for touchdowns.”

The slight drizzle that fell to the ground Tuesday evening quickly turned to a complete downpour, forcing the Longhorns to relocate to the bubble.

“As long as there’s no lightning, I want to stay out there and prove to our guys that we’re not soft,” Herman said. “But at the same time, you only get 12 practices in pads, and you want to make sure you’re getting good work.”

But the team’s relocation didn’t occur until after one of Texas’ defensive leaders sustained an injury. Herman announced that linebacker Gary Johnson strained his groin.

“He was rushing the passer, got locked up, cleat got stuck in and twisted his leg kind of awkwardly,” Herman said. “I don’t think it’s anything serious.”

Current Longhorns will return to practice Thursday afternoon while Dickson, Elliott, Hill, Jefferson, Warren, Williams and now Ford get their shot at the NFL pro day, which begins 9 a.m. Wednesday.