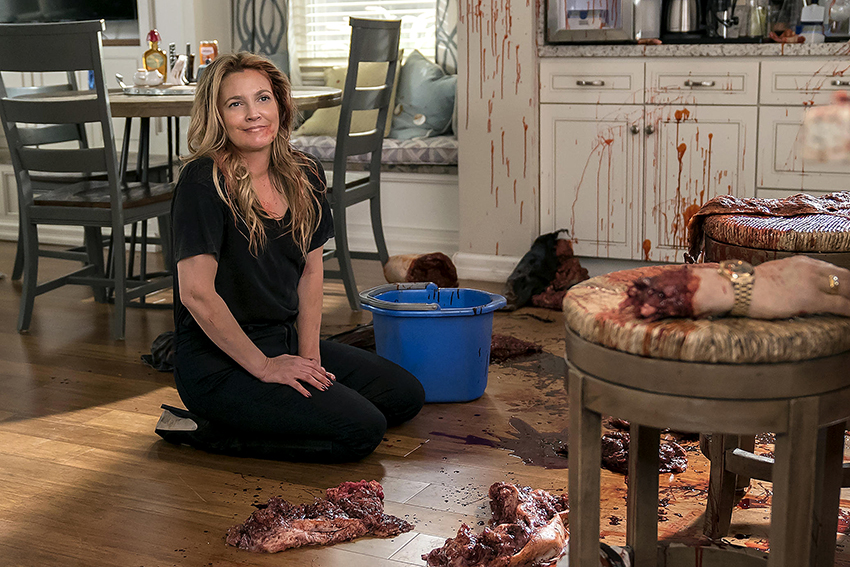 The latest season of Victor Fresco’s Netflix Original, “Santa Clarita Diet,” is a gory exploration of sitcoms, zombie cinema and a family holding together through difficult circumstances — and is bloodier than the last.

The show returns to husband-and-wife real estate agents Sheila (Drew Barrymore) and Joel (Timothy Olyphant), as the Hammond family navigates Sheila’s undead existence and the new but familiar challenges that come along with it. Previously, Sheila had become a member of the undead through mysterious circumstances, causing her to become sick and die. She then rises as a bolder and more ravenous version of herself with an insatiable drive to kill. There is a literal talking head in the family’s storage unit, and the couple’s daughter, Abby (Liv Hewson), reacts poorly to her mother’s undead status with a burgeoning rebellious streak.

Sheila’s undead existence and her terrible boss, Carl (Andy Richter), are major sources of conflict that create problems between herself and Joel, leaving them to solve their issues as a mature team instead of running into the sunset, screaming. This juxtaposition of domesticity with Joel and Sheila’s murderous agenda to get her fed is as ambitious as it is successful. The couple’s circumstances are often a backdrop to musings about what makes their 20-year marriage work. Filled with genius one-liners, such as “No one casually owns a rocket launcher, Joel,” the dialogue randomly jumps to a bloodied concept of suburbia and back with ease, making conversations humorous without being overly tacky.

It’s obvious Fresco’s creation spoofs sitcoms and zombie cinema, using ridiculous and convoluted plots to hide Sheila’s true nature. No one’s looking too closely at the couple as appearances are well-managed and
disappearances are easily explained away.

In exploring how a successful family could possibly function in such dire circumstances, values such as honesty and integrity shine amid the unavoidable gore. A reflection on the Hammond family’s status as one that kills bad people is nestled in between laughs and the typical ebb and flow of a sitcom.

However, this deviation is a little more bloody than the average sitcom is. As other zombies are introduced, Joel struggles not just for his wife but also with the sustainability of his relationship with Sheila and their daughter. It’s unlikely the Hammonds will be able to maintain the lifestyle they have known for so long, forcing them to change a variety of things about their lives. This theme of sustainability — or rather, unsustainability — is a clear assessment of zombie cinema, a genre that typically relies heavily on blood and gore and loses its substance after constant reuse of the same plot devices. Projects such as “Santa Clarita” provide arefreshingly sustainable version of zombie cinema, breaking from the traditional pattern of characters hunting and being hunted.

A casually bloody affair, “Santa Clarita Diet” is your new favorite zombie comedy — no offense, “iZombie.” If you’re stressed from work, school or life, sit down and watch as Sheila rips multiple bodies apart. The sound is intensely therapeutic, and your hands will stay clean.