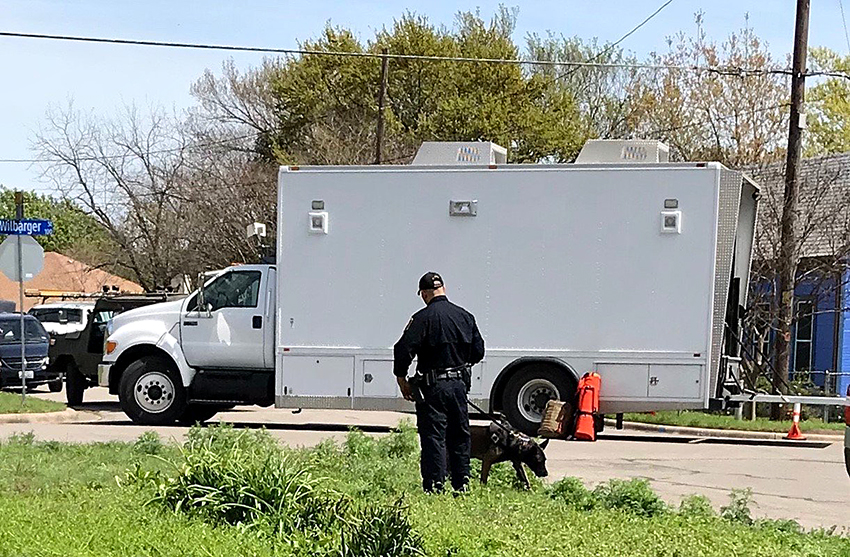 Because of the string of Austin bombings which began March 2, the UT Police Department has permanently increased the presence of K-9s in its explosives unit that perform random sweeps of campus areas, UTPD Chief David Carter said.

“It’s important to recognize that (a sweep) doesn’t mean there was a call or a bomb threat or a suspicious package at that location, but (that the explosives unit is) being proactive,” Carter said.

“(The task force’s) responsibility was to go out and not only respond to calls of suspicious packages, but (to) be proactive and go out and do checks of various locations,” Carter said.

The investigative portion of the task force is winding down as it is no longer needed, Carter said. However, the K-9s will remain and conduct regular random sweeps on campus. Before the Austin bombings, UTPD would only send the bomb-detecting K-9s to campus events or as a response to calls, Carter said.

The bomb-detecting K-9s on campus are Jarno, Beta and Spike. Soon there will be a new K-9 at UTPD to replace Spike, who is close to retirement, Carter said.

The K-9s are hired by UTPD as certified bomb dogs, Carter said. Both the dog and its handler go through ongoing training to detect explosives throughout their career.

Joell McNew, vice president of SafeHorns, an organization committed to advocating safety on campus, said UTPD did a good job in adding the task force as an extra safety measure.

“Austin is no longer a small college town. We have become the eleventh largest city in the U.S.” McNew said in an email. “Anything and everything that UTPD and UT can do to ensure campus safety is always a positive. Adding officers on patrol with trained K-9s is a valuable asset to our large open campus in an urban setting.”

During the Austin bombing investigations, UTPD and its K-9s assisted the Austin Police Department, the FBI, the Bureau of Alcohol, Tobacco, Firearms and Explosives and the Department of Public Safety. Carter said UTPD responded to more than 80 suspicious package calls off campus and did more than 20 K-9 explosive detection sweeps to assist APD and ATF, which had been overwhelmed with calls.

“The important thing is that the policing construct in the greater Austin area is trying to work as a team,” Carter said. “We are not operating individually, because no single police department has resources to handle every single emergency by themselves.”

Government freshman Andrew Harmon said he is proud UTPD was able to assist APD in its investigation and that UTPD’s presence made him feel more comfortable during the Austin bombings.

“Although it was an unnerving experience, I had to continue my life on campus and around Austin,” Harmon said. “The increased security by UTPD and APD made me feel as comfortable as possible and helped to improve my own awareness.”