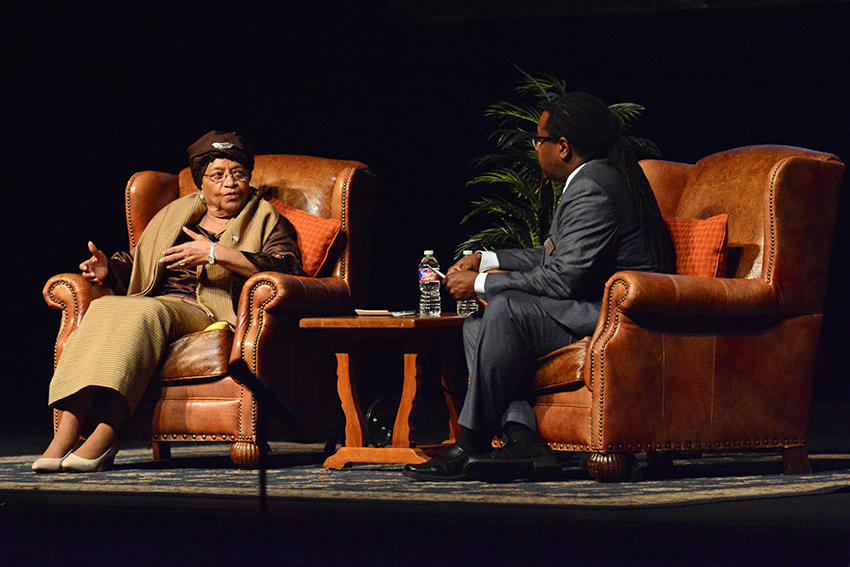 Dubbed “Africa’s Iron Lady,” Sirleaf’s path to power was not a straight one. After being exiled to Kenya twice and wrongfully imprisoned, she had to fight to assume her power in 2006. Yet once she earned her presidency, she quickly secured millions of dollars of foreign investment for Liberia whilst entirely erasing its debt, according to Britannica.

“At 79 years of age, I have been fighting Liberia’s battles for more than half a century — all of my adult life,” Sirleaf said. “When I was sworn in … I had great expectations for Liberia’s recovery, but the scope of the challenges was staggering, and most were skeptical. Could Africa’s first democratically-elected woman president bring peace to a country destroyed by war? Historians will look back and answer, ‘Yes.’ In Liberia, the ballot box has replaced bullets.”

Sirleaf talked about her hurdles in politics but focused heavily on her obstacles as a woman. She underscored feminism when she said the importance of empowering women and girls was one of the top three lessons she urges politicians to learn. She said women are a powerful force, especially when they decide they are going to come together.

“There are certain obstacles women face, but they are surmountable,” Sirleaf said. “The women’s time has come, period.”

“I think it was important for her to say women and girls in Liberia now have a role model to look up to,” Tindaan said. “I thought that was very powerful because in America we’re taught to know that whatever we want to do in this life we can do it, but there are not that many role models in the fields we want to go in to.”

During the Q&A portion, chemical engineering sophomore Mamadou Balde asked Sirleaf about her determination to come back to Liberia in the face of two exiles.

“My mom was born in Liberia, and she couldn’t go back because there was a war and her family left,” Balde said. “The only time she could go back was when she (Sirleaf) became president.”