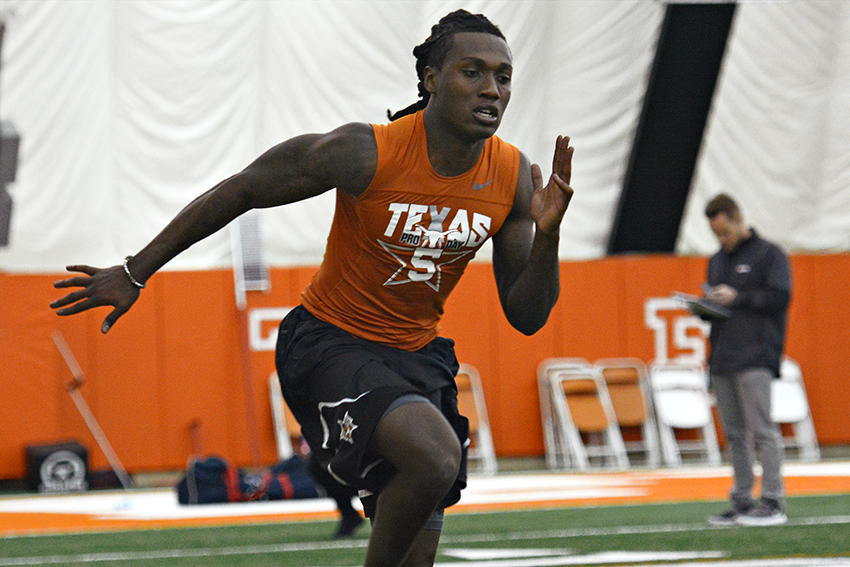 Seventy yards separated Texas’ Pro Day participants from media, their families and prospective agents. What was confusion on one side of the barricade was pure focus on the other side.

On a rainy Wednesday morning, scouts from all 32 NFL teams poured into the Bubble for Texas’ annual Pro Day. Sixteen players participated in this year’s edition, making the most of the opportunity afforded to them ahead of the 2018 NFL Draft.

For some players, including those who participated at the NFL Combine, Pro Day on the 40 Acres was a familiar setting.

“Being back in the Longhorn atmosphere was amazing,” cornerback Holton Hill said. “I’m an only child, but (my teammates) are like my brothers … it feels like home.”

NFL Combine participants such as offensive tackle Connor Williams and strong safety DeShon Elliott did not participate in all of the day’s drills, but did work on some position drills with their teammates that they couldn’t do in Indianapolis.

Of the 16 players that participated in Texas’ Pro Day, only six were invited to the 2018 NFL Combine earlier this year. The other 10 had a lot to prove, and made the most of the one chance they’d
been afforded.

For fifth-year senior defensive back Antwuan Davis, this was a culmination of all of the effort he and his teammates put forth from the time they stepped on the 40 Acres.

“I definitely let people know I’m a competitor. Twenty-two years of my life, I trained for this day,” Davis said. “Through a lot of adversity, I was still able to get an opportunity. That’s all you can ask for in this life.”

Players like Davis, wide receiver Armanti Foreman, and defensive lineman Poona Ford are examples of players who were often overlooked during their time at Texas. Today, Ford posted times in the broad jump and shuffle that were on par with those of the top-5 defensive tackles at the Combine, an event for which he didn’t receive an invite to.

Foreman and Davis both posted impressive 40-yard dash times and piqued scouts’ attention with a will and determination that most burnt orange faithful were familiar with until this point. For Foreman, Pro Day had another element: sibling rivalry.

Armanti beat his twin brother in every aspect — except the bench press.

Pro Day also marked one of the last times these players would be in Austin as a member of the Longhorns, letting players reflect on their time on the 40 Acres. Happy faces, snarky jokes and some friendly teasing with media closed out arguably the biggest day of these
Longhorns’ careers.

“It’s been amazing,” Williams said. “I think four years ago I didn’t have one offer so it’s been a transition, it’s been growing, and it’s been a learning curve, but it’s been exciting.”

As one of Texas’ most highly touted draft classes in recent years leaves the 40 Acres, those departing believe the Longhorns are headed in a positive direction.

“The guys they have now should succeed,” Jefferson said. “I think they should win twelve games … I’m tired of saying it because it needs to happen.”

As former head coach Charlie Strong famously said before his exit, “the cake has been baked.” With new classes and high expectations in tow, it’s up to Herman to get that cake out of the oven.